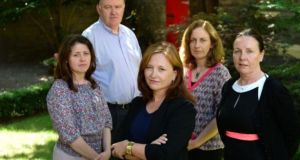 Thursday’s meeting with Pope Francis will be the first major international public recognition of a disease from which as many as a quarter of a million Catholics also suffer. Photograph: Tony Gentile/AP

Pope Francis is the first pope to recognise Huntington’s Disease (HD) and he will do so publicly at an audience in the Vatican this Thursday. There he will meet the world’s largest gathering of people with the disease.

Included will be people from Ireland who suffer from this rare inherited neurodegenerative disorder often described as the cruellest disease known to man and which is so heavily stigmatised.

This week’s event, promoted as HDdennomore (Hidden No More), was planned as a thanks to families from Colombia, Venezuela and Argentina who, more than 25 years ago, provided the samples that led to identification of the HD gene. It will be the first major international public recognition of a disease from which as many as a quarter of a million Catholics also suffer.

Huntington’s is currently incurable. A genetic brain disorder, it affects nearly a million people globally. It deteriorates a person’s physical and mental abilities often during their prime years. Symptoms include involuntary movements as well as cognitive and psychiatric challenges that have forced many affected to hide it for fear of discrimination and unfair treatment.

Approximately 750 people suffer with HD in Ireland and more than 3,000 are at risk. It has a devastating impact on the wider family – some of whom may be at risk themselves – and on carers. Family members can face genetic discrimination in accessing mortgages, insurance and employment. Children helping to care for an affected parent do so knowing they themselves may develop the condition. Carers often end up looking after more than one generation.

Pauline Doran (67) is from Longford. She is travelling to Rome for Thursday’s audience with her son Joe and daughter Anne. She lost her husband, John, to HD in 1999. The family was devastated again when Joe received an unfavourable genetic test result. As his physical and cognitive symptoms progressed he had to give up work and driving, and is increasingly isolated.

It is common for people with the disease to lack awareness around the severity of their condition, which can add to a carer’s burden. Pauline’s siblings and extended family have been very supportive and step in when she struggles. Her brother and his wife will accompany them to Rome.

While Ireland lags behind most European countries in HD research and specialist services, people from South America suffer it in the worst imaginable conditions, with many in abject poverty. Without healthcare or social welfare support, they rely heavily on their families. Some from South America chosen to meet Pope Francis have harrowing stories to tell.

Their lives are on film so that it is no longer possible to ignore their plight, at hddennomore.com. It is hoped the pope can inspire the Catholic Church in South America to help improve their awful existence.

Families coping with the disease often hide it away. A group of international advocates want to change this. Hence Thursday’s event name – HDdennomore.

Charles Sabine, a member of the HDdennomore organising group, is a gene carrier. He previously worked as an NBC war reporter and said the purpose of Thursday’s papal audience was to raise awareness.

“Research and care is held back not least because the prevalence [of the disease] has been underestimated but also because people have been afraid to engage in the kind of research needed either to bring effective therapies for the disease or to have a greater understanding of the clinical needs,” he said.

Through the participation of families living in Venezuela’s Lake Maracaibo, the Huntington gene was identified in the 1990s. The search for a treatment led to the first clinical trial in 2015 when Prof Sarah Tabrizi at University College Hospital in London began human-testing a gene-silencing drug. If successful, it will slow down progression of the disease

Pope Francis is the most prominent international voice to speak for HD families across the world who are mostly too scared to go public. The global platform he offers has the capacity to change how this disease is handled and how the families are treated. His philosophy of mercy over doctrine has allowed for this historic event this week in Rome.

Live streaming of the papal audience on Thursday is at www.youtube.com/user/vatican?app