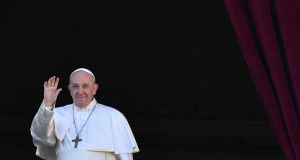 Pope Francis waves from the balcony of St Peter’s basilica during the traditional “Urbi et Orbi” Christmas message to the city and the world, at St Peter’s square in Vatican. (Photo by ALBERTO PIZZOLI/AFP via Getty Images)

At the age of twenty four, I officially left the Catholic Church after a statement from Pope John Paul II supported discrimination against homosexual teachers in schools. So, you can imagine my surprise at the news that the current Pope, Francis announced that he supports laws for same sex unions citing their right to be part of a family as his rationale.

Having turned my back on the Roman Catholic Church in favour of Anglicanism it was quite a moving experience to hear the Pope refer to people like me as “Children of God” and while Francis’ statement won’t have me running back to Catholicism any time soon it will, at least, go a long way towards healing the sense of rejection I have felt all my life as a gay man.

The Pope’s move is a brave one indeed and shows a strong example of leadership, a real sense of compassion and the true meaning of what it means to be a Christian. For far too long, we have seen the Catholic Church embark on a widespread damage limitation exercise in relation to the institution’s gravely inadequate response to decades of child sexual abuse and maltreatment of unmarried mothers and their children. Therefore, I would argue that such an honest and open approach to homosexuality from the descendant of St. Peter and the very representative of God on Earth is to be welcomed and applauded by the LGBTQ community world wide.

It is disappointing and somewhat belligerent, however that many within the LGBTQ community have rejected the Pope’s statement as being too little too late and it would appear that for some gay couples, anything short of a blessing in St. Peter’s from the Pope himself simply will not do. However, I believe it is counterproductive to focus on the failings of the past, which nobody can deny were hurtful and left many Christian members of the LGBTQ community feeling at best ashamed and at worst the personification of evil itself.

On the subject of homosexuality, the Pope has gone further than anyone else within the hierarchy of the Roman Catholic Church has gone before and those of us within the LGBTQ community should accept this olive branch with open arms and celebrate this progressive new stance with the the good grace for which it was no doubt indented. By forgiving we heal and by working together we grow and by embracing the truth we love

Derek Byrne is an academic and journalist and regular Crucifer at Christ Church Cathedral in Dublin.