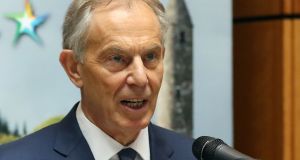 At the moment it is still mainly former politicians, such as Tony Blair and Nick Clegg, who are explicit about their desire to prevent the UK leaving the EU. File photograph: Paul Faith/AFP/Getty Images

The campaign to stop Brexit is gathering pace. The most obvious sign is the increasing chatter about a second referendum. At the moment it is still mainly former politicians, such as Tony Blair and Nick Clegg, who are explicit about their desire to prevent the UK leaving the EU. Active politicians tend to talk about a “soft Brexit”. For some, this is simply a convenient code, or a staging post, for their real goal – stopping Brexit altogether.

The reasons that Remainer politicians are still so cautious about explicitly rejecting Brexit is that they are worried about sounding undemocratic. As the evidence mounts that Brexit is going to be bad news for the economy, so Leavers are increasingly falling back on one main argument: “the people have spoken”. Whatever the economic costs may be, Brexit must roll forward. Anything less would be an insult to democracy. This argument is sometimes accompanied by dire predictions of social turmoil if the will of the people is thwarted by “the establishment”.

If Remainers are to have any chance of blocking Brexit, they have to find a response to the democracy argument. But that will become increasingly easy, as the contradictions in the Brexit project become evident.

The key lies with Theresa May’s most famous and fatuous sound bite: “Brexit means Brexit”. This statement was meant to signal resolution and clarity. In reality, it was a meaningless tautology that underlined the fact that “Brexit” could mean a great many things.

The 52 per cent majority of voters who chose Brexit were actually two minorities, voting for two incompatible ideas. The largest minority seem to be in favour of “hard Brexit”, which prioritises control of immigration over access to the single market. But a substantial minority of the Brexit vote place a higher priority on free trade than on border controls. These two minorities were turned into a majority because the “Leave” campaign successfully convinced enough voters that there was no choice to be made. Britain could have frictionless trade with Europe, while ending free movement of people and stopping payments to the EU.

It is now obvious that this vision of a pain-free Brexit was an illusion. As the real choices become clear, the slim pro-Brexit majority could easily fall apart. That is all the more likely because opinion polls have consistently suggested that a majority of voters are not prepared to pay a personal economic price to secure Brexit.

The more that it becomes apparent that the Brexiteers’ original vision is collapsing, the more shrilly they will insist that a second referendum would be undemocratic. But the Leavers’ view of democracy is similar to that of a third-world dictator – “one man, one vote, one time”. In other words, once a decision has been taken by referendum, it cannot be revoked.

This is a principle that would never be applied to electoral democracy, where it is essential that consent is renewed every five years, at a minimum. Referendums, it is argued, are different. But are they? The only reason that Brexit is happening is because a referendum on EU membership held in 1975 has been reversed by a second referendum held in 2016.

The Brexiteers argue that a new vote on EU membership was justified because the EU has changed fundamentally since 1975. Fair enough. But the Brexit that is going to be delivered to the British people is very different from the one that many people voted for. If new information justified a second vote on EU membership, why does new information not validate a second vote on Brexit?

Some opponents of a second referendum reject the idea not because it is undemocratic but because they fear a backlash from Leave voters. There is a violent nationalist fringe in Britain that could be stirred up by an effort to reverse Brexit. The murder of Jo Cox, a member of parliament who was a vocal supporter of immigration and the Remain campaign, is a reminder not to take that prospect lightly.

But if Brexit is stopped, it will be through a lawful, democratic process, not a coup d’etat. And no law-governed society should allow itself to be intimidated by the threat of violence.

The real question is whether the British public can be persuaded that a second referendum is needed. As with Scottish independence, there is an understandable public reluctance to reopen a divisive issue. For Remainers, the biggest risk is that the true costs of Brexit do not become apparent until after the UK has left – and it is too late to reverse the decision.

That is certainly possible – maybe even probable. But it is also a distinct possibility that there will be revelatory moments in the next two years that create a clear demand for a second vote. A serious breakdown in negotiations with the risk of a “no deal Brexit” would be one such scenario. Another would be a series of concessions that made it clear the promises of Brexit, such as an extra £350 million (€394m) a week for the National Health Service, will not be delivered.

The sheer incompetence and infighting of the current May government can also be relied upon to undermine the case for Brexit on a weekly basis. At a certain stage, the British people might reach the obvious conclusion that the Brexiteers have had their chance – and failed. Then it will be time to take back control.