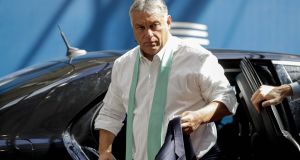 The outcome of the recent European Union budget negotiations was greeted with relief in many quarters. People were rightly impressed that the commitment of the 27 leaders to the future of the union led them to make very significant compromises and to significantly increase the financial firepower of the union.

However, many commentators were much more disappointed with the summit’s approach to the controversial issue of the rule of law. In recent years both Poland and Hungary have taken a series of measures that undermined judicial independence as part of wider measures that have undermined liberal democratic values.

Article seven of the EU treaties provides a mechanism to strip member states who violate liberal democratic values of their voting rights. However, this has not proved to be an effective tool as the punishment can only be triggered by the unanimous vote of all states bar the state concerned and Hungary knows Poland will defend it from censure and vice versa.

In these circumstances, people have been looking for other means to dissuade EU member states from undermining judicial independence and democratic values. A key proposal has been to provide a mechanism to cut EU payments to countries who violate these values.

Unfortunately, the agreement that emerged from the summit kicked the can down the road in this regard. It stated that EU “financial interests” had to be protected and noted the importance of democratic values and the rule of law. However, it took no immediate action but instead stated that the European Commission would “propose measures in case of breaches for adoption by the [European] Council by qualified majority” (a qualified majority means 55 per cent of the states representing 65 per cent of the EU population must vote in favour).

Within the EU, states are suspicious of empowering the commission and often reluctant to antagonise other member states

This outcome has been greeted with disappointment by many who have been campaigning for the union to take a firmer line with Poland and Hungary, a disappointment which can only have been intensified by Viktor Orbán’s triumphant declaration that he had seen off all attempts to link EU funding to respect for the rule of law.

However, there are good reasons to think that the outcome of the summit significantly increases the chances of meaningful financial penalties being imposed on states who fail to respect the rule of law.

The EU treaties contain a provision, article 322(1)(a), that allows the European Parliament and the council to pass legislation setting out financial rules in relation to the implementation of the budget. Importantly, the treaties provide that in doing so the council will be able to adopt the legislation in question by a qualified majority.

The agreement at the summit that the commission can make proposals to protect the EU financial interests in relation to the rule of law means the commission should have political cover to use article 322 to propose measures to limit the transfer of funds to countries that do not respect the rule of law.

This is important as in the past there has been dispute about whether article 322 could be used to seek to enforce respect for the rule of law, including from the council’s own legal service.

Allowing article 322 to be used in this way means the chances of meaningful action increase significantly. Poland and Hungary will not be able to veto proposals based on article 322 as such proposals only require the support of a qualified majority.

That is not to say that a good outcome is inevitable. The commission has to propose the relevant legislation. Furthermore, within the EU, states are suspicious of empowering the commission and often reluctant to antagonise other member states. The EU system provides plenty scope for retaliation on the part of an aggrieved state. For example, Poland and Hungary could take revenge on Ireland if it supported rule of law measures by voting against Irish interests in relation to agriculture, corporate taxation or Brexit relief measures.

This means that assembling a qualified majority in favour of legislation empowering the commission to block funding to states that flout the rule of law could be a difficult task. However, the commission has been very active in taking Poland and Hungary to the European Court to challenge their attacks on judicial independence so it will be keen to bring a proposal with real teeth to the council.

Furthermore, the summit overall underlined just how deeply committed the member-state governments are to the EU. Even states that have spent years arguing for a smaller EU budget were willing, when push came to shove, to pay for hundreds of billions of euro of new spending in order to protect the union. They did so because they rightly regard the union and its single market as a vital element of their prosperity and their only chance of retaining influence in an increasingly turbulent world.

The undermining of the rule of law in Poland and Hungary is an existential threat to the EU. The union’s tiny bureaucracy cannot hope to implement and uphold EU law itself, it needs national civil servants and national judges to do so. Without adequate protection of judicial independence the entire edifice of EU law will begin to crumble. The summit showed that states will take painful decisions when they perceive a serious threat to the EU. Given the gravity of the threat posed by the undermining of judicial independence, they may be willing to risk antagonising Poland and Hungary for the greater good.