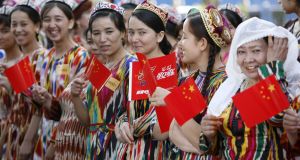 In recent months, the Chinese government has pushed back hard against claims that it is committing cultural genocide in the Uighur Autonomous Region of Xinjiang. In doing so it has defamed, insulted and disparaged the survivors of its horrific system of prison camps.

Reports that more than a million people have been imprisoned without trial in concentration camps because they have exhibited “wrong thinking” are fake, China says. They argue instead that these camps are “vocational training centres” designed to help people find jobs, understand the law, learn Mandarin Chinese and become “better” citizens.

China rejects that it is attempting to systematically destroy Uighur culture, insisting it only aims to cleanse people of “bad ideas”, ideas like practising religion, wearing overly long beards or using WhatsApp.

Video footage showing large numbers of shaven-headed, blindfolded prisoners forced on to trains in Xinjiang were labelled an “absurd fabrication” by the Chinese ambassador to Ireland He Xiangdong in a recent RTÉ radio interview.

Yet the stories of abuse, of families being torn apart, of loved ones disappearing continue to emerge. No Uighur family is unaffected. I am fortunate enough to have spent years in Xinjiang and count many wonderful friends living there. I am haunted now by the silence of these friends.

In recent weeks further reports have documented how Uighur women were forced to undergo medical sterilisation and a separate study outlined how 80,000 Uighurs were transferred to work in factories in other parts of China, factories which produce products which may end up on the shelves of Irish retailers.

The Department of Foreign Affairs has said it is “deeply concerned about the credible reports of the treatment of ethnic Uighurs and other minorities in the Xinjiang region” and that it “has raised these concerns with China in both bilateral and multilateral contexts and, along with other EU partners, will continue to do so”.

But if our government believes the reports to be credible, by implication it believes China is lying.

The renowned historian of the region James Millward wrote recently that what are needed are targeted solutions, not anti-China posturing. Understanding what role Ireland may inadvertently be playing in what is happening in China today must form part of our targeted response.

Ireland will soon sit alongside China on the UN Security Council and our vote may be vital to China at some point. This position gives us huge influence but also a high degree of responsibility.

After Ireland had been elected, the Department of Foreign Affairs tweeted that members of the UN had “honoured Ireland by placing their trust in us to take a seat at the security council and to do our best for the further objectives of peace, conflict resolution and security for all”.

If ever they were a group of people who need our help to further these objectives right now, it is the Uighur people.

The Chinese Communist Party has more than 90 million members. It is not a monolith but made up of individuals who do not all regard this issue in the same way. Leaks of sensitive material to the international media such as the China Cables published in this paper late last year demonstrate clearly that some high-up people in the party are against what is being done in Xinjiang.

China says internment and surveillance are necessary to prevent terrorist attacks. Have we not heard that before on this island? Tragically for the families of the almost 4,000 people killed during our own conflict, we know this rhetoric only plays into the hands of extremists on both sides with the cycle of violence continuing for generations.

Ireland has a moral duty to use its influence and experience to help bring about an end to this appalling campaign of persecution. Weak hand-wringing statements about being aware of what is happening and hoping the EU will deal with it are not enough.

The Chinese government may deny it but the evidence of what it is doing in Xinjiang continues to mount. There can be no ambiguity on this – trade relations with China cannot lead us to abdicate our moral duty. If we do, future generations will not forgive us.