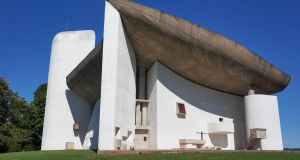 When the French Catholic Church embarked on a huge reconstruction programme in the middle of the last century, to replace 2,000 buildings destroyed by war, it had a dilemma.

Many of the leading artists of the age were not notably devout. So some pragmatism was required. “In the present circumstances,” said one of the clerics overseeing the project, “we feel it safer to call on geniuses with no faith than believers with no talent”.

Descended from Swiss Protestants, the great architect Le Corbusier had his own, very particular ideas about religion.

But when the Catholics offered him the chance to design a church on a hilltop near the Jura mountains, he at first railed against doing anything for their “dead institution”. It was only when they stressed the “living pilgrim tradition” associated with the site that he relented.

A promise of artistic freedom closed the deal. His commissioners didn’t have much to offer him, they said, except this: “A wonderful location and a chance to go all the way.”

Visiting Strasbourg last week, I took a complicated detour to see the extraordinary result of the collaboration.

This first involved a train journey south through that pleasant but little-touristed corridor of France between the Vosges mountains and Germany.

Then, from Belfort, a shorter rail trip took me west to a place called Lure (which, despite the name, is not a major attraction). And from there, I had to catch a third train back towards Ronchamp, the town nearest Le Corbusier’s Chapelle Notre-Dame-du-Haut.

A growing sense of pilgrimage had been encouraged by my inability to pay for either of the last two legs of the journey. The Lure train was going all the way to Paris and the young conductress indicated with a “pfff” that she was too busy to give me a ticket, while the man on the third leg didn’t even get as far as my carriage.

But from the deserted stop at Ronchamp, where there were no buildings, only small rain shelters on either side, the rest of the trek was on foot. And soon after turning left on the outskirts of the town, for the steep walk to Bourlément hill, I found myself amidst the “acoustic architecture” (the sounds of the forest) in which Le Corbusier set his modernist masterpiece.

The site is sufficiently remote that it is a surprise to learn it saw heavy fighting in the second World War. But it did. A previous church here – itself a replacement for the much older one struck by lighting in 1913 – was destroyed in the German bombardment.

And stones from the original have been incorporated into the grounds of the new one as a small pyramid with the dedication: “On this hilltop in 1944, French soldiers died for peace”.

As for Le Corbusier’s chapel, from certain angles, and strange as it appears, you could almost believe it had emerged organically out of the forest. White, with a brownish canopy, it looks from one side like a giant toadstool. But it is almost entirely concrete, softened only by the sunlight trapped in various hidden apertures.

The bits that are not concrete are glass: plain, coloured, or painted with the architect’s own religious graffiti and pictures of the sun, moon, stars, flowers, butterflies, and various other things that make up the surroundings.

Those surroundings now include a visitor centre and a small convent, both 21st-century additions. And whether Le Corbusier would have approved of them has been the subject of fierce hill-top conflict too, albeit verbal and mainly involving other architects.

In the decade that remained to him after he built the church, he had jealously guarded the site, fearful of a “new Lourdes”. So when the planned additions (by Renzo Piano, whose better known works include the Pompidou Centre) were announced in 2005, on the chapel’s 50th anniversary, they provoked some horror.

Not having visited the hill before they were added, I’m not sure what it lost in the process.

But partly in response to criticisms of the initial plans, the new buildings are modest to a fault, especially the convent, recessed in the hillside below the church, out of view from the entrance.

Even so, the jury has yet to return. And while those of us who are not architects wait for it, there is a certain amusement to be had from the outrage caused by modern impositions on a building that itself dates only from the 1950s, a sacrilege summed up by the severest critics of the Piano project as “Murder before the Cathedral”.

1 RTÉ receives complaint from union after ‘issue’ with spokeswoman’s accent
2 Ireland has fifth-largest number of billionaires per capita in the world, says Oxfam
3 Dr Eva’s Great Escape is everything Dermot Bannon’s recent show was not
4 Clontarf tenant says her garden was ‘destroyed’ without warning by Irish Rail
5 Leinster to face Saracens, the opponents nobody wanted
Real news has value SUBSCRIBE