Phil Hogan: Now is the time to cut our ties with Brexiting Britain 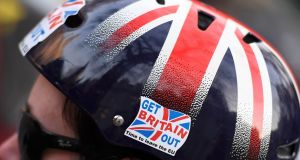 “The UK can be expected to argue strongly, if regrettably at times incoherently, for its own interests in a European Union that it has shunned.” Photograph: Toby Melville/Reuters

Ever since independence, Ireland has forged a strong relationship with the United Kingdom. It is a relationship defined by hundreds of years of a shared history – not all of it happy or respectful.

It has also been shaped by the movement of people and families back and forth across the Irish Sea. And, of course, trade and commerce have flourished between both countries, particularly in the common market for goods and services, which we have both shared since 1973.

At an EU level, Ireland has worked very closely with our UK partners on common policy positions for issues of mutual interest and concern. At both a political and official level, Irish negotiators in complex EU discussions have often found a sympathetic ally in UK counterparts for advancing specific proposals or shaping particular outcomes.

While Ireland has of course developed strong relationships with other member states – our common interest with the UK in many areas has been a defining characteristic of our EU membership to date.

Brexit will happen and we now need to take a very strategic and far-sighted review of our relationships with both the UK and the rest of our European partners. There will be a new dynamic in European affairs, and Ireland needs to be absolutely prepared to influence, shape and lead that dynamic and change.

If we don’t step up to the plate in managing this fundamental shift in our relationship with our European neighbours, then others will shape the environment for us.

It is also important that our political relationship with the United Kingdom matures to reflect the changed political and legal circumstances.

Obviously, we need to protect our trading relationship with the UK and manage how Brexit impacts on the island as a whole.

The economic realities of the trade volumes between Ireland and Britain, allied to our continued membership of the EU, obliges us to manage this transition in the most beneficial way possible.

There is a real risk that Ireland could allow our relationship with Europe to be defined by our relationship with the UK, which would be an enormous mistake in my view. Instead, we should have the confidence and direction to recognise that post-Brexit Ireland will need to have in place a wholly different set of relationships with our EU partners – relationships that we will forge, advocate, defend and address directly and out of the shadow of our nearest neighbour.

This approach to managing the new realities for Ireland from a post-Brexit Europe needs to inform and direct our engagement with all our EU neighbours, including the UK, in the run-up to Brexit.

We need to ensure that we have the relationships established and maintained to facilitate a clear and direct understanding of Ireland’s specific needs and requirements across all EU member states.

While it is the UK which is leaving, it is the remaining EU 27 who will decide the exit conditions and those that will apply afterwards.

Once the prime minister, Theresa May, triggers article 50, a process will commence that will move the centre of power and influence on Brexit away from London and firmly plant it in Brussels.

The UK can be expected to argue strongly, if regrettably at times incoherently, for its own interests in a European Union that it has shunned.

While none of us desired Brexit, it is a reality that we now have to face.

Unwittingly, Brexit may present Ireland with the chance to seize the next phase in our development and maturity as a sovereign state.

It will force us to forge relations and shape our destiny within the EU without the presence of our nearest and strongest ally since 1973.

Given the stakes involved, we need to seize that challenge now. In doing so, we have the opportunity to redefine and reassert Ireland’s position as both committed Europeans and good next-door neighbours.

1 Luke ‘Ming’ Flanagan bares his bottom half to European Parliament
2 Normal People: Full-frontal nudity was not its most radical feature
3 Trump turns to bible for photo op as DC burns around him
4 Gardaí investigate Dublin Black Lives Matter protest over Covid-19 rule breach
5 The subtle signs that point the way towards haemochromatosis
Real news has value SUBSCRIBE