The people of neutral Éire had become accustomed to wartime shortages of all kinds 75 years ago. 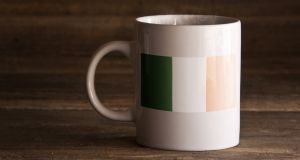 “Tea had many less obvious uses. It could polish mahogany and clean umbrellas.”

Shortly after Christmas 1941, the Department of Supplies announced that the recent increase in the weekly tea allowance from half an ounce (14 grams) to one ounce could no longer be maintained and that the old allowance would apply from January.

The people of neutral Éire had become accustomed to wartime shortages of all kinds 75 years ago.

Staple household goods such as paraffin oil, coal, gas, matches, candles, dried fruit, white bread and sugar were only available in limited quantities and margarine had disappeared in September but the scarcity of tea was probably the shortage felt most keenly.

Before the war, the average Irish person consumed 2½ ounces of tea each week almost as much as tea drinkers in England. Most of it was sourced by blenders and wholesalers via the tea market that operated in Mincing Lane, London, and, while 10 per cent was retailed in packets, it was generally sold loose by grocers who weighed the quantity required by the customer from a tea chest containing the requested blend.

Tea-drinking was popularised in England in the 1660s by King Charles II and while we don’t know when the practice became common among the upper classes in Ireland, the existence of silver teapots from the 1720s suggests that it was well-established by then.

But it didn’t become the principal beverage of the majority of the people until after the Great Famine and, as late as the 1860s, tea in a chest washed ashore on the Great Blasket was only used to dye petticoats.

Once the habit took hold and became an integral part of daily living, there is some evidence, albeit scattered, of men believing that women spent too much time imbibing instead of attending to their domestic duties or, worse, meeting around a tea table to gossip.

In 1894, the inspectors of lunatics (as they were titled) suggested to the chief secretary that the high incidence of insanity in Ireland was associated with excessive consumption of inferior tea allowed to stew before drinking.

Ten years later, the Catholic bishop of Ross, Michael Kelly, complained that the diet of the lower peasantry and labouring classes was dominated by tea and white bread rather than by the healthier oatmeal, milk and wheaten bread he remembered from his youth in Tipperary.

Less seriously, a toothpaste manufacturer in the 1920s warned in advertisements that tea time was teeth staining time and, in a speech in Ennis on August 27th, 1933, during the Economic War, Éamon de Valera suggested that the volume of tea imports could be reduced if people switched to milk and light beer.

Tea had many less obvious uses. It could polish mahogany, clean umbrellas, or (when cold) soothe the eyes of dogs if they were suffering from inflammation. It could also disguise the unpleasant taste of Krushchen salts, which were a popular cure for constipation, flavour poteen (mountain tay) and be drunk “black” as a penance during Lent.

The cut-back at the end of 1941 was particularly galling for the minister for supplies, Seán Lemass, because he had established a company Tea Importers (Éire) Ltd to source product directly from India rather than depend on Mincing Lane which was controlled by the British ministry of food.

It had purchased a large quantity in Calcutta and it planned to have a consignment sent via the Panama Canal to ports on the east coast of North America whence it would be brought to Ireland by another new company, Irish Shipping. But only a small amount reached Ireland and the outbreak of war between Japan and the United States made further shipments impossible.

Some tea was imported later from Africa and Brazil but the half ounce ration continued until 1945 and restrictions on supplies with regulated prices remained until 1952.

In 1947, the state-owned importer was replaced by the privately owned but state-supported Tea Importers Ltd. It, and its stand alone successor Tea Importers (1958) Ltd , were obliged, until Ireland joined the Common Market in 1973, to source supplies directly from their countries of origin.

Lemass was determined that Irish tea-drinkers would never again be at the mercy of Mincing Lane. The 1958 company had a banking arm that became the Irish Bank of Commerce, which was later absorbed into the Anglo Irish Banking Corporation.

English people ” made the tea” or “brewed up” while Irish people traditionally “wet the tea”. In the 1950s, when tea was again freely available, a marketing organisation, the Tea Council of Ireland, felt it necessary to remind customers how to “wet” it properly. One spoonful of tea for each person should be placed in a warm, dry earthenware pot.

Freshly boiled water should be added, the pot should be covered with a “cosy” and placed on the hob and the liquid should be let “draw” for five minutes before serving.