Why do the Sisters of Charity want to own a maternity hospital?

Una Mullally: We cannot pretend that religiosity is not still embedded in the upper echelons of State-funded healthcare 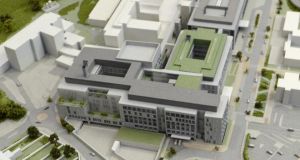 Stories about the ownership and governance of the National Maternity Hospital after it moves from Holles Street have been bubbling for a while. We’ll leave aside for a moment the fact that the State is giving sole ownership of the €300 million complex planned for the Elm Park campus, next to St Vincent’s University Hospital in Dublin, to a religious order that has contributed just €2 million of the €5 million that it promised to pay in compensation after the Commission to Inquire into Child Abuse, chaired by Mr Justice Seán Ryan, published its report, in 2009. The mind boggles that it will be this order, which ran institutions where mothers, babies and children were abused, that will own the National Maternity Hospital. Talk about Gubu.

The governance issues seem to have been squared off, and everyone involved appears to be satisfied. Rhona Mahony, the master of the hospital, says it will “be clinically and operationally entirely independent, in line with national maternity policy”. Minister for Health Simon Harris has echoed this. Yet four of the new hospital’s directors will be proposed by St Vincent’s Healthcare Group.

Dr Peter Boylan, the former master of the National Maternity Hospital, has repeatedly queried this arrangement between nuns, hospital and State. On Thursday’s Morning Ireland, on RTÉ Radio 1, he asked, “Why do the Sisters of Charity want to own a maternity hospital?” It’s a valid query. Boylan said that were IVF, sterilisation, abortion and gender reassignment to be carried out at the National Maternity Hospital, it would be the only hospital in the world owned and run by a Catholic order to allow them. I doubt that the Republic of Ireland is going to blaze a trail of this nature anytime soon.

Are we to accept that the largest force opposing reproductive rights for women does not have broader motives in maintaining control of our maternity hospitals?

At a time when the healthcare, reproductive rights and very wombs of women in Ireland are matters of national debate, are we to accept that the largest force opposing reproductive rights for women – the Catholic Church and the religious orders that are part of it – does not have broader motives in maintaining control of our maternity hospitals? We cannot pretend that religiosity is not still embedded in the upper echelons of State-funded healthcare institutions. The names are on the doors.

Then there’s the ownership issue. The Department of Health has confirmed that the Sisters of Charity will be the sole owners of the hospital. Harris is keen to offer assurances about copper-fastening operational independence, but the broader point remains that religious orders, especially those that have flouted basic decency in refusing to compensate the victims of their abuse, have no place in owning State-funded maternity hospitals. Nor does their “ethos” have any place in potentially influencing the healthcare within them. If the State is building and paying for a hospital, the State should own it. This issue has not been resolved. But if the Sisters of Charity still owe €3 million of that promised €5 million, surely the site that the order owns in Elm Park can be used as partial payment for the bill that is still languishing in the ether.

Harris’s buzzword is “golden share”. This is a meaningless phrase, but it seems intended as an assurance that the final say will rest with the Minister of Health of the day, protecting the public interest. But as the Labour politician Kathleen Lynch said, on Drivetime on RTÉ radio on Wednesday evening, the last time the Government had a “golden share” in anything was in Aer Lingus, and that certainly didn’t protect the airline.

What assurances do we have from the Sisters of Charity that their ethos will play no role once the hospital is built?

Lynch does not accept that the ethos of Holles Street will be protected at the new hospital, and she’s right. We’ve heard plenty of opinions, yet the nuns are conspicuously quiet. What assurances do we have from the Sisters of Charity that their “ethos” will play no role once the hospital is built? They’re the ones who’ll own the place, not Simon Harris. Lynch is right in saying that the sisters are entitled to their views, but, as she also said, in an era when legislation and people’s expectations of maternity care are changing, how can we expect the Sisters of Charity to give up those deeply and genuinely held beliefs when it comes to the new hospital that they will own?

What about IVF? What about intersex babies and gender reassignment? What about abortion in order to save a mother’s life, or in any other case? As for the ownership of other hospitals by religious orders, Lynch says that “a maternity hospital is different”, and she’s right about that, too.

The church and its orders have strong views on aspects of maternity care. Down the line, when abortion is legalised in Ireland, are we to expect that an order will permit that procedure in a hospital it owns? It would be like hoping for blood transfusions in a hospital owned by Jehovah’s Witnesses.

And why are the Sisters of Charity in big-business healthcare anyway? The target market for St Vincent’s Private Hospital, another part of the group, is certainly not the poor. One of the order’s motives has to be to hold the Catholic line when it comes to the delivery of medical care. And if care at the new National Maternity Hospital were indeed to go against the Catholic ethos, how could that be squared by the church and the religious order that owned the place? Let’s get real.

Simon Harris is a young man, part of a generation taking to the streets for women’s reproductive rights

The State has in the past handed our education and healthcare institutions to the Catholic Church and to religious orders. It’s 2017. Simon Harris is a young man, part of a generation taking to the streets for women’s reproductive rights, a generation that is saying “never again” when it comes to the control the Catholic Church has exerted over women’s bodies through both institutions and the Constitution.

State-of-the-art maternity care is crucial. But so is maternity care that is completely independent, where treatment can be delivered without interference or any blurred lines to do with “ethos” or ownership. The National Maternity Hospital has to be our hospital. If religious organisations want to build their own maternity hospitals, let them at it. They’ve enough money to do so, because plenty of their victims are still waiting for it.