Pay caps are neither economically crazy nor morally wrong 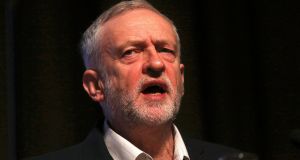 Jeremy Corbyn’s call for a wage ceiling is an echo of a Swiss vote in 2013 to limit the pay of top executives to 12 times the wages of their lowliest employees. Photograph: Neil Hall/Reuters

UK Labour Party leader Jeremy Corbyn has called for a maximum wage for Britian’s highest earners, an ostensibly draconian measure necessary to stop the UK becoming a grossly unequal, bargain basement economy. The suggestion was met by a deluge of outrage and disapproval, being described in turn as “idiotic”, “lunatic” and “incoherent” – and that’s from within his own party. Those who oppose Labour went even further, deriding Corbyn’s incompetence for suggesting a policy that is “economically crazy”, “socially pernicious”, and even “morally wrong”.

While Corbyn failed to back his recommendation with specific figures, the idea of a wage ceiling has been around a long time, and deserves seriously scrutiny. In 2013 the Swiss people voted on a referendum to introduce a cap on executive pay, which would limit the pay of top executives to 12 times the wages of their lowliest employees – the so-called “1:12” proposal. The referendum did not pass, but the fact that there was a referendum on this issue in a country not known for its radical politics suggests that this idea is not as absurd as it may seem.

What is so patently ludicrous about a maximum wage? Sound economic reasoning is the predominant argument used by those who unconditionally reject this idea. The assumption is that inequality between wages is the best way to stimulate productivity, since the prospect of earning a high income is the only incentive behind economic activity. Putting a cap on executive pay would disincentivise the work force, undermining economic growth, progress, and development.

No one would deny that economic incentives stimulate productivity, which is precisely why a maximum wage should not be confused with a flat wage policy. Inequalities can be justified, but within limits. The question is whether economic incentives require infinite inequality.

Across the world the inequality between the average and top earners is not only widening, but it has become obscene. In the private sector in the US the average chief executive is paid more than 500 times the pay of the average blue-collar worker. In the UK things may not be as extreme, but they are still unacceptable: according to the UK’s High Pay Commission, an independent inquiry, top executives earn 145 times as much as the average worker.

In order to understand the appeal of a wage ceiling, one needs to look beyond the crude, short-sighted vision of neoliberal economics. The father of modern economics, 18th century philosopher Adam Smith, was adamant that economics is more than a social science; it is also a moral science. There is more to economic thinking than maximising efficiency and profit. The influential Oxford economist Tony Atkinson, who passed away on New Year’s day at the age of 72, made the study and measurement of inequality a legitimate topic for economic analysis and concern.

Similarly, moral philosopher Thomas Scanlon, of Harvard University, argues that there are many reasons why reducing inequality is desirable. These include relieving suffering or deprivation, avoiding unacceptable forms of power and domination, and restricting the threat to procedural fairness. Furthermore, reducing inequality across society is necessary for another reason, perhaps the most important reason of all: to prevent stigmatising differences in status. Nothing undermines one’s self-esteem, and reduces productivity, more than being perceived as inferior to others.

The idea of introducing a maximum wage policy, perhaps a 25:1 ratio, would be sufficient to preserve a monetary incentive, which in turn would manifest itself in greater output, while at the same time protecting the integrity and dignity of those at the bottom end of the wage scale. If we are serious about not engineering “socially pernicious” environments, then we need to find ways to curb the excessive levels of inequality in our society.

Is it an economic imperative that top executives should earn in a week more than their lowest-paid workers earn in a year? Not necessarily. Is gross inequality morally damaging and socially devastating? Absolutely. From a political point of view growing social inequality is also ultimately destabilising, as the election of Donald Trump in the US and the approval of Brexit in the UK strongly suggests. It is undeniable that the widening gap between the rich and the poor not only generates widespread hopelessness, but it also fuels menacing new forms of populism and political intolerance.

One would hope that Ireland will not make the same mistake as its American and British counterparts, by having the courage to adopt policies that tackle the genesis of social inequality. Something like Corbyn’s maximum wage policy deserves, at the very least, serious debate and consideration, unless, that is, we want Ireland to become a grossly unequal, bargain basement economy.