His sense of purpose told him the State could not continue as it was in the late 1950s, losing its population to mass emigration and its morale to creeping despair

There are perhaps only two figures who can be said to have defined an era in the life of the State. One was Éamon de Valera, a revolutionary hero and formidable politician who stirred visceral emotions of loyalty and disdain. The other was a cerebral civil servant, quietly charming but with a carefully restrained public persona.

In some respects, Thomas Kenneth Whitaker’s achievement is even more remarkable than de Valera’s. He created the paradigm for the Ireland we now inhabit without a political machine, without ever standing for election and without polemics, rancour or divisiveness. And if the age of de Valera came to an end, thanks in no small measure to Whitaker, the age of Whitaker is still with us. The basic ideas that shape the State in the 21st century are his.

A nobility to public service

He himself always stressed that he was indeed a servant, working for and through elected politicians. He never set himself above or beyond the primacy of electoral democracy. But nor did he hide behind it.

He knew that, especially in his 13 years as secretary of the department of finance, he had real power, not just because of the weight of his office but because of the respect his intellect and ability commanded. He used it with exemplary courage, honesty and personal responsibility.

Whitaker loved the bureaucratic life because he found in it the things that gave him deep personal satisfaction and that mattered far more than the much higher salaries he could have commanded elsewhere: friendship, a collegial spirit, the possibility of getting things done through “the sense of shared duty and purpose”. 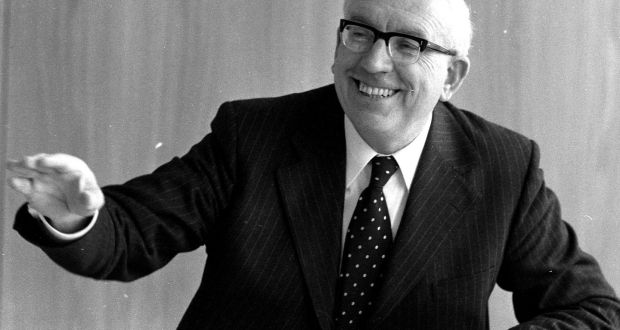 TK Whitaker: A life in pictures

Those latter words may seem simple enough, but Whitaker became important because he recognised that duty and purpose did not always sit easily together. He had a duty to keep the State going and he was no natural radical. But his sense of purpose told him that the State could not continue as it was in the late 1950s, rapidly losing its population to mass emigration and its morale to creeping despair.

When he published ‘Economic Development’ in his own name in 1958 (a bold step for a departmental secretary) he knew very well that he was providing cover for the political system to retreat from the indefensible ground of protectionism and begin the long march into globalised modernity.

He was offering himself as a potential scapegoat if things went wrong. He did this for the simple reason that it was the best way he could serve his country. Whitaker had a deep love for the Ireland that shaped him – the imagined community of nationalist, Catholic, Gaelic culture still had his allegiance. But he was loyal enough to believe that he owed it more than piety. He believed it would not survive unless it was transformed.

The transformation was, all in all, less traumatic that it might have been because Whitaker provided a remarkably enduring map of the terrain to be crossed. It had three great landmarks: the creation of an export-led industrial economy driven by inward investment; Ireland’s future as part of the European Union; and a solution to the national question based on the principle of consent. For all the political fragmentation of recent years, that triangle still defines the space within which public policy operates.

Ken Whitaker would be the first to acknowledge that all paradigms must eventually shift and that even his own will have to be rethought eventually. But the one he forged helped his country to find its way towards a future that, however imperfect it may be, is demonstrably better than its past.

As a person and as a patriot, he also gave it a powerful example of grace, civility, good humour, intellectual rigour and service to the common good.

To adapt what Jonathan Swift said of himself and Ireland:

“His country he has left his debtor,

We wish it soon may have a better.”

The Irish Times view on the National Maternity Hospital: a symptom of a bigger problem

If there is any way for the State to buy the land, even at this late stage, it should be done

The Irish Times view on France’s election: a bad day for frontrunners

9:07 Newton Emerson: Poots’s big mistake was to move too fast

9:45 Fintan O’Toole: Anything is possible now, we can renew Ireland

Newton Emerson: Poots’s big mistake was to move too fast

1 That morning cup of coffee you love? It turns out to boost your health too

2 Man taunted after being assaulted by ‘well-known’ GAA players

3 In Schull you’d buy a top and everyone would know. How could anyone get away with murder?