The Nifty Fifty at (nearly) Sixty: An Irishman’s Diary about the Honda Cub motorbike 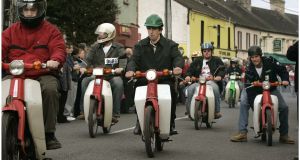 It is now 60 years since the establishment of diplomatic relations between Japan and Ireland, a milestone that brought the two countries’ foreign ministers together in Dublin earlier this week. Meanwhile, although the events are officially unrelated, 2017 will also mark 59 years since the arrival here of another kind of Japanese emissary that, in its own way, has cemented the relationship.

I refer of course to the Honda 50, aka the Honda Cub, first produced in 1958 and destined, in various guises (some of them a bit more powerful than 50cc) to become the most popular motorised vehicle, two or four-wheeled, of all time.

Its appeal was global, clearly.  But it could have been custom-designed for the back roads of Ireland, as they existed back then, and was suitably appreciated.

We know it won a special place in the national psyche because, among other things, Christy Moore now sings a song about it.  Actually, the song was written by Tom Tuohy, a man equally familiar with the soft tarmac of the Irish midlands.  But Moore was part of that first Irish generation to be liberated by the Honda 50: he has spoken warmly about his first experiences with one, as a pillion passenger en route to a Brendan Bowyer concert circa 1961.

Tuohy’s song is set somewhat later, in the 1980s, when the Celtic Tiger had yet to roar but the Honda Cub was still snarling.  In his affection for the bike, however, he may have exaggerated slightly about its performance: “My little Honda 50, she’s rapid and she’s nifty/She’ll do a hundred and fifty, on a windy day”.

Even gale-assisted (and I’m told the bike is as sensitive to wind conditions as a small yacht), she probably wouldn’t do 150, at least not in speed terms.  Achieving 150 to the gallon, on the other hand, was always more than feasible.

In a 1983 fuel-economy competition, reported by this newspaper, a Honda Cub owner coaxed his bike from Cork to Dublin for a total bill of £1.46, winning a trophy and £200 in the process.  Our impressed motoring correspondent calculated this at “295 miles per gallon”, despite also noting (with some poetic licence) that the trip from Cork to Dublin was “all up hill”.

The manufacturers didn’t always guarantee that level of performance.  But according to Conal Newman, Ireland’s greatest living Honda expert (or one of them, anyway), the company did promise 240 miles to the gallon, assuming flat roads with no wind, and doing 19 miles an hour, with an economy-sized driver.

Newman was also among the earliest beneficiaries of the Honda charm offensive.  He bought his first model around the same time Christy Moore was getting lifts to Brendan Bowyer and now has a sizeable collection, including three of the first-generation “push-rod” types.

His stable also includes a more advanced Cub that has been a multiple winner in the annual “Nifty Fifty” endurance race at Mondello Park, wherein Honda lovers compete to earn €5,000 for a nominated charity while exercising their beloved machines.

Songs aside, helped by that same irresistible rhyme, “nifty fifties” have been central to an advertising campaign for a certain telephone directory service whose number is now unforgettable as a result.  And I know of at least one stage play that has also been inspired by the motorbike: Seamus O’Rourke’s Ride On (2008), a post-boom drama among Honda 50 enthusiasts in a shed in Cavan.

The bikes continue to inspire devotion, among new generations.  Maybe the greatest act of Irish homage was by a Wexford twenty-something named Sean Dillon, who in 2013 piloted a Cub from Alaska to Tierra del Feugo and, en route, took a vertical detour into the Guinness Book of Records.

Noticing how well the engine performed at high altitudes in snowy Peru, he did some research on Existing records and then ascended the side of a volcano to 5,700 metres: justifying the bike’s nick-name, El Burrito (“little donkey”), although probably not maximising fuel economy.

Back at sea-level, in Delvin, Co Westmeath, another year of more conventional trips - group “Honda Runs” - will get under way next month, on February 26th.

And among the plethora of events listed in the Japanese embassy’s year of celebrations, the Nifty 50’s contribution to diplomacy does not go unacknowledged.  The bike is expected to feature, as usual, at the Vintage Japanese Motorcycle Club of Ireland (vjmc.ie) Show, to be held at the National Exhibition Centre, Swords, on April 30th.