Paul Mason: What unites the new movements of the left?

‘All over the world, centrist politics is being challenged from the left and right because the neoliberal economic model is broken’ 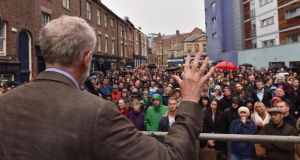 Tony Blair, in a last-ditch attempt to dissuade Labour from backing Jeremy Corbyn, introduced an interesting proposition: that Corbyn, together with Syriza in Greece, Podemos in Spain and Bernie Sanders in the US represent a “parallel political reality”. Blair contrasted the new radicalism of the left and right with what he called “real reality”.

For those who’ve covered the rise and demise of the political generation that gave us the Iraq war, Guantánamo and Abu Ghraib, this sudden concern with what is, and is not, “real” is telling. For it was the Bush-Blair generation of politicians who derided their opponents as the “reality-based community”. Bush adviser Karl Rove famously told journalists: “We’re an empire now, and when we act, we create our own reality . . . We’re history’s actors . . . and you, all of you, will be left to just study what we do.”

Nothing demonstrates the scale and rapidity of the historical change we’re living through better than the sudden inability of politicians attached to the neoliberal project to do exactly this: to create reality. Once powerful people are becoming bystanders to reality.

In Greece, the parties they nominated to lead the country through the nightmare of austerity evaporated; decades of political capital and the support of every privately-run TV station proved useless against Syriza – a far-left party whose entire administrative history was contained in five box-files in its shabby HQ in Athens.

In Spain, where several million relatively apolitical people took to the streets in 2011 on a one-way journey away from the political establishment, we have now seen city after city fall to the radical left party Podemos and its local allies.

In Scotland, when accidentally handed the chance to secede from a perennially conservative Britain and start afresh, 45 per cent of people voted to do so – in the face of warnings of disaster from the media, banks and central bank.

And in the British Labour Party, again almost accidentally, the candidacy of a perennially ineffective lone left-winger looks set to dislodge the grip of the centre-left over one of the world’s oldest social democratic parties.

Blair wonders whether to “go full frontal” and take on the left-wing threat, or to “build bridges to it”. For the global political centre this is the right question – but the wrong time to be asking it.

From the Lehman Brothers crisis through the Arab Spring and the Occupy movement this moment of electoral challenge from the left has been coming. But the political centre assumed – not without evidence – that the institutional defences against a swing to the left were strong.

Well, it turned out, masses of ordinary people could.

With Syriza, whose evolution I’ve had the chance to study up close, it plays out like this. In 2011 so many people took to the streets and rioted that when I told Jeremy Paxman about it, live on air, he responded with disbelief.

But it was real. I’d stumbled through clouds of tear gas to watch very ordinary shopkeepers, kebab stall owners, concert pianists, interior designers – the classic small business layer beloved of the political centre – pick up stones and hurl them at the cops.

It was then, reportedly, that Alexis Tsipras, looked out of the window of parliament and told his colleagues: “those are our people”. Syriza, which only formed as a unified party to contest the 2012 election, gathered electoral support – by being credible, restrained, rigorously constitutional – and by focusing on the economic grievances that were driving the left, sidelining more traditional obsessions such as Nato or Palestine.

Once in power, Tsipras took Greece into an economic war with the euro zone he had not expected, nor properly prepared for. Having been forced into a humiliating retreat, and with the loss of a third of his party to the left, he is still leading the polls in the run-up to the September 20th election.

If we ask, in retrospect, Blair’s question – how could the Greek equivalent of Labour have “built bridges” to the people who have joined and voted for Syriza – the difficulty becomes clear.

Syriza right now contains many natural social democrats. Disgusted to the point of switch-off by the patronage and corruption surrounding their old party, Pasok, they built their own bridge – by joining Syriza. Just as young British voters look at Blair and think “Iraq”, young progressive Greek voters look at Pasok and think “austerity”.

When centre-left parties do things that seem inimical to the values of their mass base it takes a long time for the scars to heal. That’s the first problem.

Unsustainable financial bubbles alongside unsustainable fiscal deficits were the means by which the centre-left of the pre-2008 period “delivered” to their mass base: a cheap mortgage and some tax credits were to be compensation for the loss of high-skilled work and stable communities, which would never return.

All over the world, centrist politics is being challenged from the left and right because the neoliberal economic model is broken; and because the interconnected political and business elite took way too long to listen to what those street protests were actually about.

Yet the left insurgency may only be a phase. The most interesting question of all is: what would a non-neoliberal social democracy look like? Until the centre left starts to answer that it will be left, like Blair, pondering the difference between the reality of Davos, Bilderberg and Jackson Hole, and the reality of mass meetings, packed to the gunwales, for Jeremy Corbyn. Paul Mason is economics editor, Channel 4 News, and author of Postcapitalism: A Guide to Our Future

1 We need to pay very close attention to what is happening in Britain now
2 Remaking Ireland: Five positives from the pandemic
3 Irish tourists excluded from visiting Greece as country begins its tourism season
4 Quarantine will cease within fortnight, Ryanair CEO claims
5 Connell losing touch with the club championship is the real tragedy of Normal People
Real news has value SUBSCRIBE