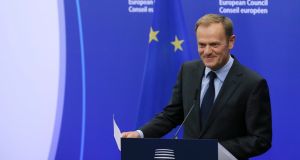 EU Council president Donald Tusk: “In my opinion, the only alternative to a hard Brexit is no Brexit.” Photograph: Olivier Hoslet/EPA 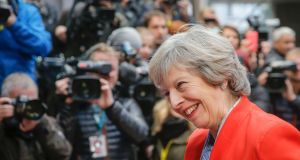 British prime minister Theresa May: EU states are resisting substantive pre-negotiation with the UK and demand a clear ask from May when talks start next March. Photograph: Thierry Roge/AFP/Getty Images

“In my opinion, the only alternative to a hard Brexit is no Brexit.” This stark warning by Donald Tusk, president of the European Council, one month ago has gained traction since then among EU governments, echoing a similar hardening of political opinion in the UK.

Why this should be so matters for Ireland. Over-exposed as we are here (and in Britain) to wishes that Brexit be as soft as possible, or even reversible, in alignment with increasingly well-documented risks to economic interests, it can be difficult to understand such hardenings.

Tusk’s argument hinges on the real threat Brexit poses to fundamental EU values and interests. Brexiteers want access to the single market without free movement of labour. As he put it: “That is pure illusion; that one can have the EU cake and eat it too.”

It would unacceptably devalue EU membership and others would seek similar deals. All would be losers in that case: “There will be no cakes on the table, for anyone. There will be only salt and vinegar.”

Tusk’s negotiating logic dictates there be no compromise on these fundamental interests. A similar conclusion is being drawn across the 27 member states. It is heard from Danish, German, Dutch and Estonian political leaders just as much as from Austrian, French, Spanish and Italian ones. They resist substantive pre-negotiation bilaterals with the UK and demand a clear ask from Theresa May when talks start next March. It is part of a high political game in which the UK has a weaker bargaining hand to play.

Political and public attitudes are also fully in play. Adding the Trump shock to the Brexit one reinforces the stakes involved. Trump’s links with Nigel Farage underline that this is a normative and existential question for the EU 27. Membership must be seen to matter in terms of values as well as interests against this pairing which opposes the EU and wants to destroy it. They and the hard Brexiteers are better described as phobes than sceptics or critics. The EU 27 are determined not to be outflanked by such developments.

Forthcoming votes in Italy, the Netherlands, France and Germany reinforce the fears of fragmentation or disintegration voiced by existing EU leaders as they contemplate possible radical change. They are well aware of the shifting public attitudes expressed in support for right- and left-wing populisms which pitch homogeneous people against corrupt or untrustworthy elites. For most leaders Brexit does not top the crises over austerity policies, globalisation, migration, security or terrorism even if it crystallises them in negotiating terms.

Opinion surveys reinforce the picture of public division and disenchantment. Europeans are divided pretty equally on whether they want less or more EU action to tackle many of these questions. While most want more action according to a Eurobarometer poll, a more recent Demos one gives more detail of how that varies between and within some of the member states. Overall there is a demand for more action but less trust in political leaders to organise it – and national leaders are trusted even less than European ones.

The impasse reflects the failure of current political elites to articulate and advocate the values of mobility, recognition, respect and solidarity underlying the EU after years in which market-competitive or neoliberal answers to the economic crisis outweighed those based on social justice.

Constitutionalising such dominant responses through technocratic institutions such as the European Commission and European Central Bank has made it more difficult to create a redistributive politics capable of responding to demands for a more social Europe. The existing EU budget of around 1 per cent of its collective GDP is incapable of financing that.

Those who want to see greater EU fiscal capacity to help fund employment creation, sustainable infrastructure, social insurance and transfers between rich and poor regions to respond to the populist surge, must formulate such demands and argue them out at domestic and European levels.

That would help create a politics capable of bridging divides between these spheres and linking to voters demanding such change. We have an increasingly common politics which entangles political leaders and voters but lacks adequate means to represent their preferences effectively.

Ireland must steer a careful way between these hardening attitudes towards Brexit and its desire for a soft outcome. That will be easier to achieve by stressing the unique or special case affecting us and Northern Ireland. But we too must prepare for a deeper debate on where we want the EU to go without the UK.

1 Gardaí investigating four-lane motorway sulky race
2 Is coffee good for you?
3 Woman sues over catching Legionnaires’ Disease in luxury hotel spa
4 Bloomberg attacked from all sides in heated Democratic debate
5 I decided that day if I start working for myself at least I'll know where I stand
Real news has value SUBSCRIBE