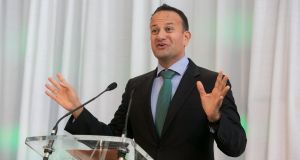 A November election would require Taoiseach Leo Varadkar to gamble his office, when he could look forward to sitting in it for another six months. Photograph: Gareth Chaney/Collins

Another bout of the general-election jitters skittered around Leinster House in the aftermath of the budget on Wednesday.

Fianna Fáil thought Fine Gaelers were leaving Leinster House suspiciously early on Thursday – what did they know? Fine Gaelers knew the budget was the last act of confidence and supply.

The contagion spread quickly. Joan Collins decided she needed to get noticed so she said a rude word in the Dáil. Parties sent fellas to check up who was using the Dáil printing facilities.

In the members’ bar, Fianna Fáil TDs exhibiting at last just a bit of swagger after months of decent opinion polls, joshed with Fine Gaelers about a November election. TDs eyed up constituency rivals and asked journalists if their opponents would run again. It was that kind of week.

Every time the nervous nellies of Kildare Street have seen an election looming since 2016 – and there have been several such periods, notes one level-headed Fianna Fáil TD – they have been wrong. But they will be right someday.

A general election before next year remains impossible unless there is a resolution of Brexit. Nobody will trigger an election until Brexit has been resolved because to do so would lead to the mother of all monsterings for being reckless at a time of national peril, etc.

At a time when there is general (and justified) self-congratulation for a unified national approach to Brexit, it’s hugely unlikely that anyone would risk tearing that up.

So until Thursday evening, the election speculation was just idle chatter, filling space because everyone thought the budget was boring (the irony: for years we have been calling for prudent and conservative budgets; when we get one, we complain it’s too boring).

But once the prospect of a deal suddenly appeared after the meeting between Leo Varadkar and Boris Johnson, that changed. You can imagine what it did to the Leinster House rumour mill.

Now, hold the weddin’ for a bit. A deal that allows the UK to leave in an orderly manner on October 31st, with a transition period, remains a possibility and not yet a probability. Even if Varadkar and Johnson can see a pathway to a deal, the details still have yet to be worked out and once concluded, passed through the House of Commons.

If it doesn’t work, you can put your election speculation away for another few months. But if it does work, Varadkar will be faced with the biggest political decision of his career since he (politely but unmistakably) gave Enda Kenny a little shove and ran for the leadership of his party and the country.

A November election is hardly without pitfalls for Fine Gael. Its polling numbers are anaemic

The power to choose the timing of an election is one of the most important weapons in the campaigning armoury of any government. It is not one recent Fine Gael taoisigh have used wisely. John Bruton went too early (1997); Kenny went too late (2016). What will Varadkar do?

Picking the date for an election is not about deciding when would be a great time. That is rarely open to a taoiseach, beset as they inevitably are by the vicissitudes of governing. Certainly things do not look especially propitious for this administration right now. But what they need to choose, says one Minister, is: will there be a better time?

Micheál Martin says that the finance Bill and the social welfare Bill must be passed. “There will be no election this side of Christmas,” he told Newstalk yesterday.

But there might be, Micheál. “We can pass the social welfare Bill and the finance Bill in a day if we want,” says one Minister. “C’mon. Micheál has been saying there can’t be an election until Brexit is sorted. Well, if it’s sorted, then obviously there should be an election.”

The suspicion in Fine Gael – not entirely ungrounded, I think – is that Fianna Fáil would not like an election in the aftermath of a Brexit deal for which Varadkar would likely take some credit. Rather, the party sees an election in February or March, with waiting lists lengthening and homelessness numbers bulging as the optimum time. The last two February elections have been gruesome affairs for the incumbent governments.

If a deal is completed, the election lobby in Fine Gael will be on steroids. “There won’t be one Minister counselling against a November election,” says one member of the Cabinet. A sensible TD tells me that the parliamentary party is overwhelmingly for an election.

Others point to the impending byelections, four of which take place at the end of November. Varadkar has already been engaging in expectations management, suggesting that he hopes the party can win one out of the four. It might win none.

The fear in the party is that it might lose all four badly. If that happens, it will change the narrative from a government which is leading on Brexit to one which is under severe pressure at home, struggling on, out of oomph and ideas, just waiting to be put out of its misery.

A November election is hardly without pitfalls for Fine Gael. Its polling numbers are anaemic. It’s under pressure on health and housing. It has a few candidate problems. This week’s budget will help it to argue its case for economic prudence, but it has a lot of ground to make up.

It also requires Varadkar to gamble his office, when he could look forward to sitting in it for another six months. Though I suspect this is entirely the sort of bold move that would appeal to him.

At the start of this week I would have said there was no chance of a November election. That’s changed now. If there is a deal on Brexit – still a big if – then the chances are more like 50-50. A hectic few weeks, home and away, lie ahead.