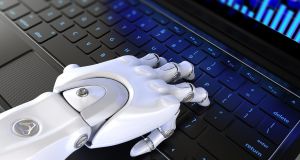 ’We could soon reach a point at which our smartest machines become more intelligent than we are and accelerate away from us on an exponential learning curve.’

The self-driving car has become the poster gadget for the next wave of automation powered by artificial intelligence. It is a terrifying idea.

Turning basic transportation over to robots will, almost certainly, cause the greatest job extinction event in labour history, wiping out the already dwindling earning potential for taxi drivers, truckers, delivery people and many more.

Tech giants like Uber, Google, Tesla and others presume that they and their shareholders – and therefore, in some unspecified way, the whole of society – will gain from this next round of “creative disruption”. But in the long term, they could be wrong.

Who will feed the families of the millions of people worldwide left without jobs? Who will make up for their lost taxes? And what will our new tech overlords do with all the money they get from destroying old-fashioned employment?

The form suggests that, left to themselves, the tech giants won’t park their profits in Ireland, or anywhere else where ordinary people might have need of it. And yet as the rest of us get poorer, who will buy or hire their self-driving cars, or purchase new iPhones, or pay for the products advertised on Facebook?

Another reason for fearing the new robot order is voiced, ironically, by one of its chief proponents. Elon Musk, founder of Tesla, has staked a fortune on self-driving cars. Yet he is also increasingly worried by the artificial intelligence which will drive them.

He and many other techies now believe that, unless steps are taken to limit the power of AI, we could soon reach “the singularity”, the point at which our smartest machines become more intelligent than we are, figure out how to upgrade themselves, and accelerate away from us on an exponential learning curve. Our own technological civilisation, in that scenario, would no longer have any more use for us. Unless supercomputers keep pets.

These seem to be the bleakest of futures: either our technology one day deliberately turns against us, or discards us, or our civilisation collapses before that can happen, when the vast bulk of humanity finds itself surplus to the requirements of a small – but presumably well-armed and ruthless – tech and financial elite.

There is, though, a third scenario for an automated future, one in which humanity survives the mass elimination of useful employment. Not surprisingly, this potential third way is increasingly touted by tech leaders as a way to square technological determinism with the needs of consumers, or “humanity”, if you prefer.

This is the idea of a universal basic income, a living wage which would be paid to every citizen whether they had another job or source of wealth. Freed from welfare, poverty traps and the need to toil at low-paying jobs, people could decide to do nothing with their lives, or to prepare themselves for more demanding forms of employment, or to devote themselves to cultural pursuits, or to sports, or to leisure, or to helping other people.

In this way, the wealth created by new technology could be spread to the mass of the people (although few tech chiefs propose that they or their corporations should pay higher taxes: the money, as they tend to see it, should come from existing government budgets).

What would such a paradise look like? According to Kurt Vonnegut’s first novel, Player Piano, it would look a lot like a hell.

Published 65 years ago, in 1952, Player Piano has always been overshadowed by later works like Cat’s Cradle, or his masterpiece, Slaughterhouse-Five. Yet while it has flaws as a piece of literature, Player Piano now deserves to be ranked alongside Brave New World and 1984 in a holy trinity of prophetic English-language fiction.

The degenerate autocracy of Aldous Huxley’s Brave New World runs on soft power – sex and drugs and suggestion. George Orwell foresaw an inhuman future controlled by the stark yet artful lies of a brutal surveillance state. But Vonnegut, who had worked at General Electric just after the second World War, saw a future where engineers and managers would sincerely do their best to improve the world by building ever more efficient machines to do all the work for us. The result: a new form of dystopia.

In Player Piano’s future America, the old professions and trades have been automated, one by one, until only the oligarchs, engineers and senior managers still have real jobs – and even they are beginning to automate themselves out of existence. Everyone else of working age has been drafted to the army (but without loaded guns, for fear that they’ll mutiny) or assigned to a catch-all, make-work programme called the Reconstruction and Reclamation Corps – “Reeks and Wrecks”.

Doctors and lawyers, but not dentists or barbers, are already obsolete. Theoretical science faculties in the surviving universities, being of little practical use, have been amalgamated with the remnants of the schools of liberal arts, their old facilities taken over for yet more schools of engineering. A few writers are still tolerated, but they have to conform to one of 12 practical, sure-sale genres, such as dog story of the month, or else go into public relations.

Those citizens who co-operate with their own redundancy are paid a generous $30 a week, plus all the healthcare, welfare and free and convenient housing they need. If their kids are smart enough, and pass the right aptitude tests, they might be assigned to a higher professional grade, one that has not yet been automated. If they fail, there is the army, or the Reeks and Wrecks.

This, it must be remembered, is a relatively benign scenario. Vonnegut’s engineers really think they mean well. And yet the great majority of his characters are bitterly unhappy, desperate for the mundane struggles which once gave meaning to their lives.

Finally, Vonnegut’s non-tech proles rise up against the machines that have perversely enslaved them, smashing all that they can find. For Vonnegut, ever the pessimist, this is not a happy ending; the revolution runs out of steam, collapses internally, and the remaining rebels go happily to work in the wreckage of their struggle, eagerly repairing the machines that they destroyed themselves.

Vonnegut’s vision of the future which we now see before us is all the more remarkable when you consider that it predates the digital boom by several decades. In his book, automation is based on glass-tube technology, solid-state circuits, automated lathes and punch-hole programming – the symbolic player piano of the book’s title.

Vonnegut foresaw the great wealth that could be created by machine efficiency, and the inadvertent crisis of meaning that this wealth might cause. But one thing that he never thought of – or perhaps discarded as too far-fetched or inhuman – was a self-driving car.

Ed O’Loughlin is an author and journalist