Opinion: Students have had a taste of change and want more

More than 80,000 have been registered to vote by USI, students’ unions and organisations such as SpunOut in recent years 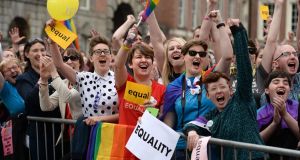 Students came out in force for the Referendum on Marriage Equality and it was not a once off. File photograph: Dara Mac Dónaill/The Irish Times 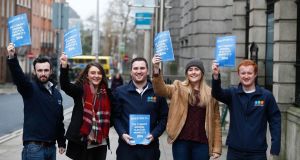 A common misconception people still cling to, despite evidence to the contrary, is that students don’t vote. Most commentators, however, accepted the fact students and young people turned out in force to vote in favour of marriage equality in last year’s referendum. From bikes and cars to boats and planes, there was hardly a method of transport available that we did not use to help make one of the most defining civil changes in recent decades.

It was a moment of celebration for everyone in Ireland. Overnight, we made a statement to the world about how we felt our people should be treated, and that was that. Over the next few months, people talked about the significance of the youth and student vote.

Soon, the need to cling to the old narrative returned. Marriage equality was all well and good, they opined, but would it transfer to everyday politics? We would have hoped the question had been put to bed in October when the Union of Students in Ireland (USI) and local students’ unions registered 10,000 people to vote in a single day.

As students’ unions sought to register new voters, demand for forms outgrew supply and many had to reprint. College halls across the country were filled with the sound of pens scratching signatures on voter registration forms. Students argued about which party could achieve what, and volunteers struggled to keep up with the demand. By the end of the day, one thing had became clear: students had had a taste of the change their vote could make, and they wanted more.

Those 10,000 became part of a larger group, totalling about 80,000 young people, that had been registered by USI, students’ unions and organisations such as SpunOut in recent years. After successive pushes, there is hardly a third-level student in Ireland not registered to vote in the upcoming elections.

If, as an under-registered group, students in 2011 fell just behind the national average, how are they likely to perform as a fully registered, politically active group with a hunger for change in 2016? This question is only made more interesting when we look at the work of students’ unions to inform their members of the various political stances.

In what is arguably the most innovative approach to a voter engagement campaign in years, the USI has teamed up with smartVvote.ie to make sure its members are informed before voting. The app works by asking participants a series of questions before telling them how well their beliefs match those of the candidates in their constituency. Some 83 per cent of those surveyed said they would use the app again before the general election.

Smartvote is beginning to show the chasm that exists between politicians and young people. Of the 20,000 who have used Smartvote, 88 per cent felt that we should repeal the Eighth Amendment.

Those who use the app will be able to see the views of candidates on a range of issues and the data it provides will ensure that young people are one of the most informed voting groups in this election.

The failure of some establishment parties to properly address the issues faced by young people could be their undoing, especially when it comes down to the last seat in a constituency. Students’ unions have been encouraging members to register to vote in their college constituencies, so as to have a higher concentration of voters in those areas, meaning that candidates will ignore youth at their peril.

The marriage equality referendum may have been the spark that ignited a political fire for young people in Ireland. Campaigns on voter registration and engagement by their unions mean that students are registered, and smartvote.ie shows that they are informed and willing to move away from civil-war-era politics.

As students and their unions prepare for the election campaign, we should hope that politicians won’t ignore the demands of a large voting bloc striving for change.

Kevin Donoghue is president of the Union of Students in Ireland