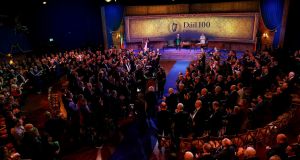 President Michael D Higgins addresses the audience at Dublin’s Mansion House on Monday for the centenary commemoration marking the first meeting of the Dáil, in 1919. Photograph: Maxwells/PA Wire

This week saw a hugely important milestone in our history as a nation, marked with dignity and verve at the Mansion House on Monday.

The President, TDs and Senators assembled for the 100th anniversary of the first meeting of the Dáil in 1919. There were lofty speeches and noble sentiments aplenty.

Speakers noted the coincidence of the other event 100 years ago at Soloheadbeg in Tipperary when the first shots of the War of Independence – which in concert with the democratic will of the people as expressed in that meeting of the Dáil eventually delivered the right of the Irish people to govern themselves.

Many also noted the unfulfilled aspirations of the Democratic Programme adopted that day by the first Dáil. It was a very impressive event.

But the speeches of the politicians of the 32nd Dáil also told us important things about our politics today – and about the likely shape of things to come.

Sinn Féin’s big idea at present is a push for a united Ireland. It thinks Brexit will do the convincing of unionists for it

The dominant parliamentary tradition that has governed since the 1920s – led by Fine Gael and Fianna Fáil, with the Labour Party playing a supporting but important role – was centre stage.

Taoiseach Leo Varadkar, Fianna Fáil leader Micheál Martin and Labour leader Brendan Howlin all made measured and thoughtful speeches, reflecting on the enormous achievement of the revolutionary generation, noting the work to still be done by their successors, but allowing themselves some satisfaction on the success of the independence project.

But although they still dominate it, the2½ parties of the old firm are no longer the be-all and end-all of Irish politics. There were several more speakers from the smaller parties and technical groups that populate the current Dáil, and they fairly pricked the bubble with a series of caustic reflections on the failures of the old parties.

But it was difficult to discern any constructive platform for a reforming government among them. The old parties have, no doubt, a lot to be proud of in building and sustaining the new State.

But to put it mildly, the impetus for change among them is not pre-eminent.

They are happier with the Ireland of 2019 than they are impatient to make it better. That’s what comes from being in government all the time. But it means the energy and ideas for change must come from outside them.

From where, though? It was difficult to see on Monday.

Quick summary: Fine Gael and Fianna Fáil are closer than they were before the last election

Paul Murphy castigated the Labour Party for not following the example of the Bolshevik revolution. Richard Boyd Barrett rejected the current Dáil as the inheritors of 1919, hailing in its place the anti-water charges campaign, abortion and marriage equality campaigners and the soon-to-be-striking nurses.

Mary Lou McDonald decried the current Dáil (“This is not the Dáil of the Democratic Programme because Ireland remains divided, broken” ). She called for “an all-Ireland forum to build for unity”.

Sinn Féin’s big idea at present is a push for a united Ireland. It thinks Brexit will do the convincing of unionists for it. Maureen O’Sullivan (representing one of the groups of independents), Social Democrats and Greens all had their say, too.

It was all deeply held stuff, no doubt, albeit of variable merit. But none of it sounded like the basis for participation in a reforming government. Many elements of this fractured group condemn Fianna Fáil routinely for really being in Government, and not in Opposition (not a view shared in Micheál Martin’s party, this).

But if Fianna Fáil isn’t the Opposition, then what is? The scattered alternative was no more impressive in the Mansion House than it is in the Dáil.

So where’s all this going? Examine the polls over the last period and you’ll find little evidence for the expectation in some of the boomier quarters of Fine Gael that the party is on course to sweep all before it and lead the next government with one or two supporting actors.

The average support for Fine Gael in the last scatter of polls is 31 per cent – pretty healthy. But the average at the end of 2015 (before the 2016 election) was 31. They got 25.5 per cent when the votes were counted. Sinn Féin also went down from polls to actual votes; Fianna Fáil went up.

Quick summary: Fine Gael and Fianna Fáil are closer than they were before the last election.

Allied to this tyranny of the numbers is a growing fear at the top of Fine Gael that the party is under pressure from Fianna Fáil in rural Ireland, something that its rural TDs are becoming quite ansty about.

That’s what’s behind the recent wobbles over the Taoiseach’s meat-eating (of all things) and Fine Gael annoyance at the apparently unGaelic practice by gardaí of pulling fellas over for drink-driving on their way to Mass in the morning.

None of which means that Fine Gael cannot win the next election, and then come out ahead in the scramble to form a government that will follow. But it does suggest the party has a lot of work to do before it gets there.

It needs a fair wind, no Brexit disaster and for Varadkar to have a good campaign. And whatever happens, if it is to achieve an unprecedented third term, it will need the co-operation of Fianna Fáil in another confidence and supply agreement. That’s one heck of an ask.

The evidence of the Mansion House showpiece suggests that the Opposition is fractured, incoherent and insubstantial. We may not be governed by Fianna Fáil and Fine Gael for the next 100 years.

But we certainly will be for the foreseeable future. Not least because they are the ones most interested in doing so.

1 Donald Trump's taxes: US president paid $750 federal income tax the year he won the election
2 ‘I never suspected that, aged 29, I’d be lost’
3 Covid-19: Possible extra restrictions for four counties to be decided by weekend
4 Graham Norton: ‘I wanted out, out, out of Ireland’
5 Hello Eir, is anybody there? Four unhappy customers complain
Real news has value SUBSCRIBE