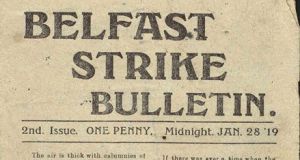 In Belfast, the 1919 strike committee effectively ran the city

‘The Messines Island of Ireland Peace School was the cradle we climbed out of to explore who we were, where we came from and, most importantly, where we think we are all going”, says Harry Donaghy, project manager of the Messines Fellowship.

Now, not for the first time, it has taken the initiative in commemorating part of Belfast’s hidden history, the 1919 engineering strike. It is part of a new series of events on the theme of “Centenaries and Citizenship: Milestones or Millstones?” programme, which is supported by the Department of Foreign Affairs in Dublin.

Members of the Fellowship are former trade unionists and former combatants, loyalist and republican, so they certainly understand how historical legacies can sometimes prove to be millstones. Some of them first met in prison.

Through the fellowship, they have discovered that many of them had grandfathers, great-uncles and other family members who served in the Great War, sometimes literally side by side in battles such as Messines.

The strike which the fellowship is commemorating this week marked the beginning of a huge explosion of industrial unrest across the United Kingdom in 1919 when workers demanded that the hardships of the war years must end.

Employers agreed to reduce the basic working week from 54 hours to 47 hours without a cut in pay but on January 14th shipyard workers in Belfast voted by over 22,000 to 1,100 to reject the offer and insist on 44 hours. On Clydeside the demand was for 30 hours.

By the end of the month there were 40,000 engineering workers on strike in Belfast and 20,000 more workers laid off as a result, dwarfing the celebrated Limerick Soviet which followed in April, both in numbers and duration.

In Belfast, as in Limerick, the strike committee effectively ran the city.

But there the similarities end. The Limerick strike was a protest at martial law being introduced in the wake of IRA activity in the city, in Belfast the strike was for better pay and conditions.

Far from clashing with the military, the strike committee had 300 workers appointed as special constables to assist the RIC in ensuring there was no outbreak of “hooliganism”; which did not prevent the Belfast Telegraph and other city centre businesses that tried to tap emergency power supplies intended for hospitals from being stoned.

Only 80 permits were issued to firms during the month-long dispute.

Hackett Pain, a former leading member of the UVF, who was now British military commander in Belfast, kept troops in their barracks, and Dawson Bates, future Home Affairs minister at Stormont warned Carson that, “Once one of the workers got injured in a melee with the troops nothing could save Belfast from becoming a scene of disorder... the consequences of which were far reaching”.

The sheer scale of the strike movement meant coercion was not an option, unlike Glasgow, where mounted police backed by troops cleared George Square and the strike leaders were arrested.

An exchange by one of the Clydeside strike leaders and future communist MP Willie Gallacher with a Belfast striker epitomised the gap between the two cities. Asked if he was loyal to the king, Gallacher replied, “That’s a stupid question. I am a revolutionary and my only loyalty is to the working class”.

The strike failed, as did that in Glasgow where men returned to work 10 days earlier than Belfast.

But both were the start of a wave of strikes for shorter hours that secured an average reduction of 6.5 hours a week across the United Kingdom by 1920.

It was the greatest reduction in working hours ever secured on these islands and one of the few gains that was not clawed back by employers once the postwar boom ended.

Belfast Labour candidates would secure a higher share of first preference votes in the 1920 municipal elections than anywhere else in Ireland, becoming the biggest bloc on Belfast Corporation after the unionists.

Yet, within six months union organisation in the shipyards was smashed and many members of the strike committee expelled.

The latter included Charles McKay, the chairman of the strike committee, who was a Catholic, and its most left-wing member, James Baird, a syndicalist, who was denounced as a “rotten Prod”. Both were submerged in a rising tide of political and sectarian violence.

The Messines Fellowship event is at the ICTU offices, 45 Donegall Street, Belfast, 11.30am to 3 pm on Friday, January 25th.