The Irish Times view on Israeli settlements: a principled declaration

Ending the occupation is in everyone’s interest, including Israel’s 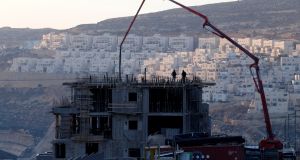 A construction site in the Israeli settlement of Givat Zeev, in the occupied West Bank, in 2016. Photograph: Baz Ratner/Reuters

The Dáil made an important declaration of Ireland’s opposition to Israel’s illegal settlements this week when it voted to approve a Bill that would ban the sale of imported goods from those settlements. The draft legislation – initiated by Senator Frances Black and approved by the lower house with Fianna Fáil’s support – would in itself have relatively little financial impact, as Irish imports from the settlements are estimated to be worth less than €1.5 million, but the symbolic value of the move would be far greater. That’s why Palestinian groups see the legislation as an important milestone, and why Israel has called the Bill an act of “pure hostility”.

The Government’s arguments are understandable. Having been advised by the Attorney General that the Bill would breach EU single market rules and raise constitutional difficulties, it would have been difficult for the Cabinet to decide otherwise. Minister for Foreign Affairs Simon Coveney argues that enacting the legislation would leave Ireland isolated and make it harder for the State to continue its efforts to promote peace. Ireland would be a “principled voice in the wilderness, satisfied in the righteousness of our course, but largely unable to influence the real action”, he said.

Successive Irish governments have strongly supported the Palestinian cause, and this administration continues to direct significant funding to the West Bank and Gaza while arguing against the settlements and for a negotiated peace. Its problem is that by tying its policy on the settlements, and on the question of whether to recognise the state of Palestine, to the EU position, its ability to take important principled steps such as these is constrained by divisions within the bloc. In that context, and given the strong public opposition to the illegal settlements, the Dáil’s frustration is hardly a surprise.

Ending the occupation is in everyone’s interest, including Israel’s. With little sign that a peace process can be revived, with Israel veering even further to the right, and with settlement expansion continuing unabated, the international community has a responsbility to make its opposition clear.

1 Coronavirus: A further 123 cases reported in meat processing plants over past week
2 Mother of three (41) who had to fundraise for her own cancer treatment has died
3 Madeleine McCann case: Police identify German prisoner as suspect
4 In six months we will be in the grip of a 1980s-style recession
5 Luke ‘Ming’ Flanagan bares his bottom half to European Parliament
Real news has value SUBSCRIBE