Of Tims, Taigs, and Tenement-Scots – An Irishman’s Diary on the changing face of insults 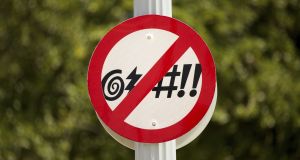 It must be the ultimate proof of Godwin’s Law that, according to Britain’s communications regulator Ofcom, “Nazi” is now considered only a mild term of abuse, of limited concern to broadcasters. Formulated in 1990 by a US lawyer, the law noted the tendency even in pre-internet computer discussions for people to use the “reductio ad Hitlerum” argument sooner or later. Updated, the rule now states: “As an online discussion grows longer, the probability of a comparison involving Nazism or Hitler approaches 1”.

A quarter-century of overuse later, the n-word has lost its power to offend. On the stock exchange of insults, as measured by Ofcom, “Nazi” now trades alongside such moderate disparagements as “Jock” (meaning “Scotsperson”) and “Hun” (meaning either “Asiatic nomad who ravaged Europe in 4th century” or “Glasgow Rangers fan”).

In fact, any controversy arising from Ofcom’s list has been dominated by those last two terms. It appears that Scots people are still well capable of being insulted by “Jock”, at least when it’s spoken with an English accent. And while the descendants of Asiatic nomads have not featured in the debate, many Rangers fans still find the h-word thoroughly insulting.

I’m reminded of a question I was asked once, back around the time of the Belfast Agreement, by a northerner of unionist persuasion. In a spirit of genuine curiosity, he wanted to know whether the word “Fenian” was considered an insult in the Republic and, if so, how much.

I told him it depended on context. That if the speaker was Michael Collins, say, at the grave of O’Donovan Rossa, calling somebody a “dead Fenian” could be high praise. Whereas in other circumstances, such as the terraces of Windsor Park, circa 1994, chants of “Fenian” would certainly be considered offensive, accompanied as they were then by the adjective “dirty” and the object “bastards”.

But on its own, I explained, the word probably didn’t mean much to most people in the South anymore. So that in many cases, they would agree to be offended by it only if it was made clear that offence was intended.

Well, this being as it may, I see that in the Ofcom list, “Fenian” is still considered “generally offensive”.

By contrast, despite the many Rangers fans willing to be outraged by it – they even organised a petition last year, to have use of the term recognised as hate crime – “Hun” remains of minimal official concern.

No sooner had Ofcom’s list reopened old divides in Scotland than comedian John Cleese made a good attempt to close them again, amid general umbrage. Annoyed by something in the papers, he tweeted, “Why do we let half-educated tenement Scots run our English press?”

This will have been a new insult to most of his followers. “Tenement Scot” is unknown to Ofcom. And even Cleese’s immediate target, Spectator editor Fraser Nelson, had to look it up before agreeing to accept it as a badge of honour.

For Irish readers, meanwhile, Cleese’s combination of racial stereotype and buildings may have evoked memories of one of the less hilarious episodes of Fawlty Towers, the one about a dodgy Irish builder called O’Reilly, whose load-bearing wall threatens to collapse until the more reliable (and English) Stubbs arrives to clean up the mess.

Added to the show’s regular clichés – witless Spaniard, fire-breathing wife, etc – that plot hasn’t aged well. But even then, apparently, Cleese & Co considered it about as well constructed as the wall.

Still on racial slurs, I was reminded too this week of another screen classic of the period, the Godfather, and in particular the scene where a Hollywood director, reacting badly to a visit from the Mafia, demonstrates a vocabulary as rich as the Ofcom list.

Director: “I don’t care how many dago Guinea wop greaseball goombahs come out of the woodwork.” Mafia man: “I’m German-Irish”. Director: “Well let me tell you something, my kraut-mick friend...”

And there’s another oddity, because even as “Nazi” has been downgraded, “kraut” remains on Ofcom’s “generally offensive” list. As does “Taig”, the bastardised Tadgh (also sometimes shortened to “Tim”) used as shorthand for Catholic Irish in Belfast and Glasgow alike.

“Mick” was always more American. There, that name was once as synonymous with Ireland as Paddy. Not any more – although it’s entertaining to note that this week’s US vice-presidential debate featured two Irish-Americans called Mick and Tim, and that the plot revolved around the immigrant-baiting son of a Scot, with the sub-theme of a dodgy wall.