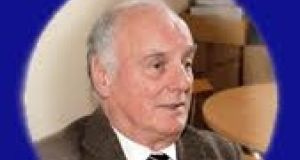 Within 24 hours of Frank Jeal’s death, tributes flooded in from around the world

Within 24 hours of the news of the death of Dr Frank Jeal, of Trinity College Dublin Zoology Department, at the age of 80, tributes poured in from almost 200 people from all around the world, former students, graduates and friends. In the comments posted on Facebook, certain words continuously cropped up, such as “enthusiastic”, “inspirational”, “hero”, “gentleman”, “legend” and “friend”.

“He was loved and cherished by everyone that knew him. He was full of life, had prodigious energy and brought joy with him wherever he went. He could explain complex issues with great clarity and I think that was one of the secrets of his success as a lecturer,” said his former student and close friend, consultant ecologist Dr Karl Partridge, at his funeral. Dr Eugene O’Loughlin has written that Frank Jeal helped and encouraged him all the way to a PhD. “I am certain I would not be who I am without his advice, support, friendship and vast knowledge.”

He was born in London, the first child of Frank Jeal and Eileen Ibell (who had Irish connections on her mother’s side) but the family moved to Didcot (now in Oxfordshire) shortly after his birth. His father worked as a footman and butler between the wars, joined the RAF in the late 1930s and served as ground crew during the second World War. Frank attended primary school in the village of Blewbury and secondary at Abingdon School, where his biology teacher was to have a lasting influence on his choice of career.

On leaving school, he joined the Royal Navy for his national service, spending two years on board HMS Maidstone, a submarine supply ship which took him to far-flung corners of what remained of the British Empire. It included trips to the Caribbean, where later in life he was to make many working visits to the Discovery Bay marine lab in Jamaica. Some of his former students from that time are now top-ranking specialists in coral-reef ecology.

He attended St Catherine’s College, Oxford, on a state scholarship, where he read natural science and zoology. There he joined the Morris Group and learned to play the piano accordion. In the group he met like-minded people and acquired an eclectic mix of songs, from old folk songs to early music-hall numbers. In later years, he became well known as a singer as much as an accordionist.

In 1962, he went to Bangor University, north Wales, where he did a PhD in immune histochemistry. His continued interest in Morris dancing led to his forming the Bangor Morris Men, which is still thriving. He became a lecturer in zoology in Trinity College Dublin in 1965 and was to remain there for the rest of his life. Although he “officially” retired in 2000, he continued to lecture and inspire further generations of zoology students until November 2016, when illness finally forced him to stop.

His special interests were in the fisheries biology of skates and rays. “His talents and popularity as a lecturer were legion. His lecturing style was fresh and engaging and his lectures were constantly stimulating, up to date and always thoroughly researched,” said his colleague Prof John Rochford of Trinity. In his memory, his friends have set up the Frank Jeal Scholarship to support graduate research in zoology.

A resident on the university campus for 30 years, he was deeply involved in student life. He was instrumental in setting up the student Zoological Society and was active in the early years of the diving club, which connected to his Jamaican visits. From the mid 1970s to the late 1980s, he spent part of each year lecturing and researching at the University of the West Indies, often taking final-year or graduate students with him to gain experience.

His love of music continued in Ireland and he became well known in the hostelries of central Dublin and in traditional-music circles as “the man with the green accordion”. He possessed a great store of songs, from traditional English folk to sea shanties to music-hall ditties. He was modest, unassuming, loved to tell funny stories and was generous by nature.

He is survived by his brother Peter, sister-in-law Terri, nephews Dagon and Ryker, grandnephew Dannen and grandniece Marnie.

1 Varadkar promises ‘early retirement pension’ amid backlash over gap
2 Search for missing remains of Mulready-Woods (17) continues
3 Dancing with the Stars: public save rhythmless reverend Ray Kelly as Yewande Biala voted off
4 RTÉ will not include Sinn Féin in second TV debate despite legal threat
5 I’ve handed in my notice and I’m leaving Brexit Britain
Real news has value SUBSCRIBE