Notorious Uzbek dictator is dead but his regime will live on 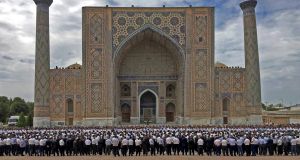 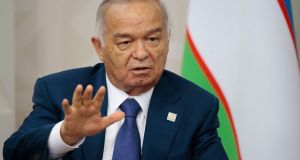 Uzbekistan’s former president Islam Karimov. Whoever takes his place will be less skilled and experienced but is unlikely to be less ruthless. File photograph: AP Photo/Ivan Sekretarev

The president of Uzbekistan, notorious dictator and serial human rights abuser Islam Karimov, is dead. When he first became national leader, Margaret Thatcher was British prime minister and Ronald Reagan had just left the White House. With the average Uzbek being just 27 years of age, most people cannot remember life without Karimov at the helm. The question now is how quickly they will forget.

We are told Karimov died peacefully, a luxury denied to many of his victims. Presiding over a repressive, paranoid and hermetic regime, he crushed all opposition – even of the most moderate hue. When accused of boiling prisoners alive, officials spoke of an accident with a kettle. Confronted by the UN with evidence of what it called “systematic torture”, the regime quibbled that the practice was unspecified in international law.

The influential Global Slavery Index ranks Uzbekistan second only to North Korea for a high prevalence of modern slavery, and every year hundreds of thousands of children are coerced into picking cotton, the county’s most valuable export, putting their health at risk and denying them an education. Citizens need permission to leave the country (a so-called exit visa) or even to live in another city.

In Karimov’s Uzbekistan, stagnation was trumpeted as stability, repression as security, and censorship as protection from subversion. When I worked at the politics department of Uzbekistan’s National University between 2002 and 2003, I encountered a curious reluctance to study the country’s own political system. It was as if scholars were wary of asking the wrong questions.

Last year, Karimov outlawed the teaching of political science, claiming it insufficiently appreciated the “Uzbek model” of development. Like an inconvenient dissident, the subject was spirited away from the national curriculum.

With unbridled power came a fear of what would happen should he lose it. Unlike his western counterparts who, on losing office, would merely be condemned to lecture tours, writing memoirs and spending more time with their families, Karimov faced exile, death, the loss of his enormous wealth and his place in history should he be dislodged. Elections, consequently, were theatres of the absurd. During the 2000 presidential contest, for example, Karimov’s only challenger admitted publicly that he had voted for the president.

Karimov revelled in his strongman reputation. Addressing parliament on the subject of unregistered religious meetings, he said, “Such people must be shot in the head. If necessary, I’ll shoot them myself.” However, it’s difficult to know whether Karimov’s persecution of devout Muslims quelled Islamic fundamentalism or inflamed it.

Despite, or sometimes because of, his regime’s character, Karimov had many influential suitors, most notably Russia, China and the US. Relations with Washington flourished in the early 2000s when America was eager to form an alliance with Muslim-majority states to combat adversaries in Iraq and in Uzbekistan’s neighbour, Afghanistan. In return for a military base, Washington indulged Karimov’s pretence that his crackdown on domestic opposition was complementary to the global “war on terror”.

The contradictions inherent in a strategy of engaging one dictator to fight another became manifest when the Karimov regime mowed down several hundred people one afternoon in May 2005 in the provincial town of Andijan. Many of the dead were secretly buried in mass graves, rendering an accurate body count impossible.

Ultimately, in a region vulnerable to Kremlin expansionism and Islamic militancy, many western leaders saw Karimov as a useful bulwark against both. During the very same weekend as Hillary Clinton celebrated the murder of Libyan dictator Muammar Gadafy, the then secretary of state flew to Uzbekistan to consult with Karimov personally.

Only last November, John Kerry discussed regional security with Karimov in his native Samarkand. An American journalist was ushered out of the very brief press conference as she tried to ask a question about human rights.

No attempt was made to prepare the population for life beyond their first and only president. Until recently, Karimov’s eldest daughter, Gulnara Karimova, was considered a possible successor. She enjoyed an extensive business and media empire, as the regime showered her with an assortment of prestigious diplomatic and educational positions, allowing her to consort with the world’s political elite.

For reasons never officially explained, she disappeared from public view and is believed to have been under house arrest these last two years. Karimova was conspicuously absent at her father’s funeral on Saturday.

Whoever takes his place in governing Uzbekistan’s 32 million people will be less skilled and experienced but is unlikely to be less ruthless. The succession struggle will play out behind closed doors with the SNB, successor to the Soviet KGB, playing a pivotal role. Karimov’s most likely successors have all thrived under his tutelage and differ little in outlook from their erstwhile master. Karimov is gone but his regime survives.

Donnacha Ó Beacháin is director of research at DCU’s school of law and government. Between 2002 and 2003 he was a civic education project visiting faculty fellow in Uzbekistan.