‘Consent’ is a word oft-used in reference to the North, but rarely is it truly sought 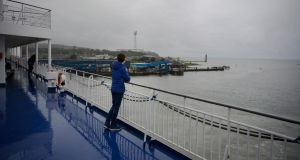 Passengers on board the Larne to Cairnryan ferry between Northern Ireland and Scotland on Sunday. Despite the fact that we stand to be the region most negatively affected by Brexit, there was virtually no attempt at dialogue or discussion with the actual citizens of Northern Ireland. Photograph: Charles McQuillan/Getty Images

The debate surrounding how the Border which divides the island of Ireland will operate post-Brexit has dominated the news cycle since the Brexit referendum in 2016.

From the backstop to a “technological solution”, a border down the Irish sea, to a border on the island; how to maintain the integrity of the Belfast Agreement whilst attaining the Conservatives’ much-sought-for hard Brexit has eaten up much of our daily lives for four years.

That the people of Northern Ireland didn’t vote in favour of Brexit is one subject often neglected in these discussions, and whilst the wider United Kingdom appears uniquely fixated on our controversial little stretch of land these days, very few appear particularly interested in the thoughts or opinions of those of us who live here.

There was no citizens’ assembly set up, no meaningful engagement with civic society

We’ve all heard the British government’s persistent rhetoric concerning a purported intent to protect the Belfast Agreement, but what steps were actually taken to consult with the people it safeguards once the Brexit vote was announced?

The peace process is inherently grounded on the basis of consent and mutual agreement, and yet there was no consent or mutual agreement to Brexit in Northern Ireland: the people voted 56 per cent Remain. Despite this fact, and that we stand to be the region most negatively affected by Brexit, there was virtually no attempt at dialogue or discussion with the actual citizens of Northern Ireland.

There was no citizens’ assembly set up, no meaningful engagement with civic society, and no representation from Northern Ireland at the negotiating table.

We often hear the term “consent” in reference to Northern Ireland but rarely is our consent truly considered. Everything from our institutions to governance to rights and entitlements were agreed upon in the landmark 1998 agreement. And, despite that historical dedication to the concept of mutual benefit and the protection of the people of Northern Ireland, nothing that is happening today has received that same measure of consent.

The Stormont Assembly did not give consent to the withdrawal agreement – a vote which had little or no effect on the UK’s plans to proceed.

Faced with no real power to mitigate the effects of Brexit on this region, the Assembly has adopted the Northern Ireland protocol, the part of the withdrawal agreement relating to special arrangements for Northern Ireland, as the best means to protect the Belfast Agreement, as well as to ensure that there is no return to a border on the island of Ireland.

In response to the UK government tabling amendments to the Internal Market Bill – which will override parts of the Northern Ireland protocol – the Assembly passed a motion making clear that the Bill does not have the consent of the Northern Ireland Assembly. It also rejected any claim that the controversial Bill is necessary to protect the Belfast Agreement. In fact, many have pointed out that it does the opposite.

Under the terms of the withdrawal agreement, the Northern Ireland institutions will be periodically asked to consent to the trading arrangements outlined within the protocol for as long as they remain in place – a recognition that consent is a fundamental part of our stability; however, deftly ignoring that the people didn’t ask for this “consolation prize” version of it.

It is, at times, enormously frustrating to be consistently talked at rather than talked to or heard, and I think that’s a sentiment shared across communities in Northern Ireland. Many Northern voices have been lost in the noise of Brexit, discarded for the oft-preferred binary argument of “usens versus themuns” – or, in this case, Remainers versus Brexiteers.

The figureheads of political unionism – in general – appear to have adopted the misconception that their base fully supports Brexit, negating the fact that there exists within Unionism a multitude of views and beliefs, as does there within nationalism.

In addition to these conveniently ignored inconvenient truths, many unionists also voted against Brexit, and continue to support remaining as closely aligned with the EU as possible; but, in keeping with the traditions the people of Northern Ireland have become well acquainted with, these voices have been all but drowned out.

This is in tandem with the reductive perception of the people of Northern Ireland as solely Unionists and Nationalists, a perception that does not reflect the diverse society which has slowly grown to flourish over the decades.

Those who identify with neither political label rarely receive mention, be it in the negotiations or in the media, and no one is asking what this increasingly dominant community wants.

With public admissions from prominent Conservative MPs that they haven’t even read the Belfast Agreement, and a persistent inherent inability to understand the nuances of Northern Ireland, it can be of little wonder why many here continue to feel that the British government does not have our best interest at heart. You can’t protect an agreement you haven’t read, don’t understand, and fundamentally don’t support.

Brexit is happening, with or without our consent, but as we enter these crucial final weeks of the negotiating process and witness our day-to-day lives and shared history being dissected by those around us, I can’t help but recognise that there’s yet another a great injustice on the horizon for this region.

The people of Northern Ireland didn’t vote for Brexit, but they did, however, vote overwhelmingly for the Belfast Agreement, and it is the values within it that outline the future which people across this whole island consented to.

Emma DeSouza is a journalist and citizens’ rights campaigner