The Taoiseach Enda Kenny has met with British prime minister Theresa May in Dublin. The two leaders discussed the implications of Brexit for Northern Ireland, the border and economic ties between Ireland and the UK. Video: MerrionStreet.ie 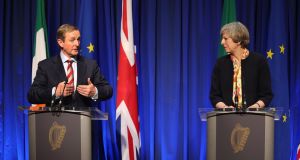 The timing, duration and nature of British prime minister Theresa May’s visit to Dublin last Monday revealed much about the low priority which she and her government attach to engagement with Ireland on the implications of Brexit.

Her rhetoric was reassuring and the body language was diplomatically pleasing but the summit fell far short of the level of real engagement necessary at this transformative moment in British and Irish relations.

May’s early-evening trip to Government Buildings came at the end of a busy day and a hectic week for the prime minister.

She must surely have been jetlagged after high-profile visits to the new president of the United States and then to Turkey in the previous 72 hours.

She hopped over to Dublin from Cardiff where earlier that day she had held meetings with leaders and ministers from the Welsh, Scottish and Northern Ireland executives.

Her visits to Cardiff and Dublin had all the hallmarks of a round of consultative photocalls before the Westminster parliament debated the Brexit Bill later in the week.

May was accompanied to Dublin by Northern Ireland Secretary James Brokenshire, but none of her three ministers who will actually negotiate Brexit, David Davis, Boris Johnson or Liam Fox, came along with her.

This Anglo- Irish summit on Brexit also had limited value as a media opportunity. Irish journalists dutifully covered the meeting but it got almost no coverage in London.

It seems few if any of the Downing Street press corps travelled to report on it.

Hopes that the meeting might have provided an opportunity to insert Irish concerns into the wider British public debate on Brexit proved unfounded.

The formal statements which May and Kenny delivered after their short talks could have been written weeks ago.

Even May’s op-ed piece in this paper – which somewhat unusually appeared the day after rather than before the summit – did no more than restate generalities.

The premiers tried to camouflage the lack of substance in the summit with some colourful soundbites.

The most memorable was May’s suggestion, parroted by Kenny, that after Brexit there will be a “frictionless” and “seamless” Border arrangement on this island and that there will be “no return to the borders of the past”. There was no detail on how this could be achieved, however.

Talk of a “frictionless” Border post-Brexit has since been exposed as a fantasy.

Over the last four months the Northern Ireland select committee at Westminster has been holding hearings into the implications of Brexit for “the future of the land Border with the Republic of Ireland”.

They have heard evidence on the topic from local authorities, business and community interests in the Border regions.

It’s a level of public exploration of the Brexit consequences which to date has been sadly lacking in our own political system.

“These are nice words,” Lux said before making it clear that while Britain would be free to do whatever it liked about customs on its side, the Border after Britain left would be a European trade border and all goods flowing across it would be subject to the European customs code on the Irish side.

Pickett pointed out that even if the UK was able to form a new customs union or free trade agreement with the European Union there would still have to be a trade Border between Northern Ireland and the Republic.

Hermon and her colleagues asked the experts to comment on suggestions that modern technology would make it unnecessary to have physical restraints or manned customs posts on the Border.

Lux and Pickett made it clear that putting in place any such technologies was complicated and would take many years so that a physical Border would have to re-emerge, at least initially.

The two experts would not of course have appreciated that apart from the technological limitations, the political and security realities surrounding our Border would also be challenging.

At one point, Hermon shuddered when she was telling them of a suggestion she had heard that trade over the Border could be monitored by helicopters.

Any installations on our Border with Northern Ireland, even if only to host cameras, are likely to become the focus of dissident republican activity.

Far from being “frictionless”, the re-emergence of a Border in Ireland threatens to be literally explosive.