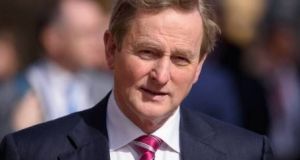 In October 2013, when the results of the Seanad abolition referendum was announced, Kenny promised he would reform the Upper House. He didn’t mean it, and did everything possible to avoid doing so

Many moments from Enda Kenny’s term as Taoiseach and leader of Fine Gael have been recounted and replayed in recent days. They included important national and international achievements on his part. Cumulatively they reflect what on balance was a successful and positive career. Its also worth reflecting on seven moments which illustrated Kenny’s determination, above all else, to stay in power.

Bruton and his co-conspirators sought to exploit panic within Fine Gael arising from what proved to be a temporary surge for the Labour Party in the polls. They were naïve to think that Kenny, who had worked so hard to build up the party since 2002, was going to go quietly just as his opportunity for power was in sight.

With Phil Hogan playing the role of political heavy, Kenny confronted the conspirators directly, sacked them from his front bench and comfortably won a no confidence motion.

This moment also marked the rehabilitation of Michael Noonan. He had defeated Kenny for the leadership in 2001, and had then dumped him from the front bench. In a remarkable act of personal forbearance, Kenny not only embraced Noonan’s offer of support during the heave but promoted him to the finance portfolio from which he had just sacked Bruton. The Kenny-Noonan partnership contributed much to the success of Kenny’s first government.

February 26th, 2011, was the day after a general election, and in a series of interviews Kenny promised greater transparency from the new government it was then clear he would lead, He spoke of how “Paddy wants to know”. It was corny, but in the short term served to reassure a traumatised public that the new taoiseach would be straight with it about the economic situation. It was the first of many occasions when Kenny’s peculiar turn of phrase served his political purposes.

On Saturday, October 5th, 2013, when the results of the Seanad abolition referendum was announced, Kenny acknowledged that sometimes in politics “you get a wallop” and went on to promise that he would reform the Upper House. He didn’t mean it, and he did everything possible since then to delay and avoid doing so.

On July 11th, 2013, the Protection of Life During Pregnancy Bill was passed. Kenny and his government deserved credit for finally grappling with the legislative implications of the 1992 X case, although the new law had none of the dramatic implications which both its proponents and opponents contended for it.

However, its passage led to the loss of a handful of Fine Gael TDs, including European Affairs minister Lucinda Creighton, because Kenny insisted on a three-line whip. There was much talk at the time that it showed how tough Kenny could be when necessary. In hindsight it looks vindictive, especially since the party is now to allow all Deputies and Senators a free vote on future proposals on abortion.

On March 25th, 2015, the then Garda commissioner Martin Callinan retired. Again this was seen as a display of steel on Kenny’s part. It ultimately emerged, however, that the legal issues around recordings of phone calls in Garda station had been over-dramatised, and that Callinan had no responsibility for them.

Kenny was left open to the accusation that he engineered the Garda commissioner’s retirement so as to alleviate a crisis within his own coalition. His subsequent accounts on the matter to the Fennelly commission were bizarre.

It is now also clear that the subsequent sacking of Alan Shatter as minister for justice and defence was also motivated by political consideration. Kenny’s survival instincts determined both events.

On February 20th, 2016, Fine Gael held their final rally of the general election campaign. In Mayo the previous day Kenny had made controversial remarks about critics being “whingers”. When given the opportunity to withdraw the remark , Kenny, standing in front of the ill-fated party slogan “Keep the Recovery Going”, merely smirked, and said not at all. It generated TV footage which was devastating for the party. It was the last in a series of Kenny gaffes in that campaign in which the party last one third of its seats.

On May 6th, 2016, Kenny was re-elected Taoiseach. He had sustained a devastating blow in the general election and was initially badly deflated. However, over 2½ months he patiently managed to keep various Independents engaged in talks long enough to prompt some of them to join him in government and to force Fianna Fáil to enter a confidence and supply agreement or face another election.

Those who say Kenny was underestimated as a leader have it correct. He was more cunning than many gave him credit for.