Noel Whelan: It’s a FG-FF coalition – or another election

At this stage, regardless of how you look at it, outgoing government will fall about a dozen seats short of overall majority

Speaking during TV3’s leader debate, Micheál Martin said Fianna Fáil will not go into Government with Sinn Féin “under any circumstances”. Video: TV3 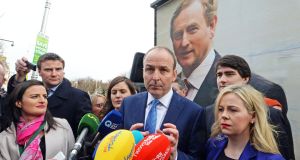 As we head into the second weekend of what we are currently calling the 2016 election, there is every possibility that we will end up having to call it the February 2016 election – to distinguish it from another one later this year.

The story in the polling and polling analysis published in the last week is that there is no story. There is no Fine Gael surge, there is no Labour recovery, and there is no narrowing of support for Independents and others. Nothing has changed since mid-December.

There will be 158 TDs in the next Dáil. One of them will be elected as Ceann Comhairle so 79 seats will be required for a bare majority. To have any prospect of lasting for anything approaching a full term, a government would need about 84 seats.

Three weeks ago in a national analysis built on a detailed study of the state of play in each of the 40 constituencies I put the combined seat numbers for the outgoing Government parties at 68 seats. My guess at that stage was that Labour might win only eight seats and that Fine Gael would win about 60 seats. Even if one took a more benign view of Labour’s prospects and put them getting 10 or 12 seats, most of these seats would be at the expense of Fine Gael so the combined figure for the two parties wouldn’t change much.

On Tuesday night Michael Marsh, the Emeritus Professor of Politics at Trinity College published an update on his “Poll of Polls” analysis for RTÉ’s Election 2016 website. He has grouped all the raw data from polls published since December 1st and used it to come up with what, for shorthand, can be described as an averaging of the figures for each party.

Having done this, Marsh puts Fine Gael on 30 per cent, Fianna Fáil on 19 per cent, and Sinn Féin on 18 per cent, Labour on 8 per cent and Independents and Others at 25 per cent.

Marsh then uses a sophisticated process to estimate what seat numbers the parties would get on these vote shares. His calculation draws on the ratio of seats to vote share that parties have won in every election since 1981, but treating Fine Gael’s disastrous performance in 2002 and Fianna Fáil’s even more disastrous performance in 2011, as outliers. Marsh adjusts this slightly to have regard to the number of candidates a “party” runs divided by the vote achieved, or the current poll figure. On the basis of this exercise, which has proven accurate to within 1.5 per cent in previous elections, Marsh estimates that his poll of poll figures would give Fine Gael 56 seats, Labour 14 seats, Fianna Fáil 30 seats, Sinn Féin 29 seats and the Independents and others 29 seats.

On Wednesday Sean O’Rourke’s radio programme published details of a Red C poll for Paddy Power. It was the first poll for which all of the sampling was done after the Dáil was dissolved and its figures were close to Marsh’s averages. It showed Fine Gael at 30 per cent, Labour on 8 per cent, Fianna Fáil on 18 per cent, Sinn Féin on 17 per cent and Independents and others on 25 per cent.

Adrian Kavanagh, the political geographer at Maynooth University, has designed his own complex modelling, applying national poll data on to the 40 constituencies to determine who would win the seats. On this week’s Red C poll Kavanagh’s model puts Fine Gael on 56 seats, Labour on 9 seats, Fianna Fáil 30 seats, Sinn Féin on 23 seats and Independents and others on 40 seats.

On each of the above separate analyses the only formation with a comfortable sustainable majority is a Fine Gael and Fianna Fáil government. In my view this remains the most likely result of the election. Whether the politicians of those two parties choose to implement it is another matter. If they don’t then another election is the next most likely outcome.