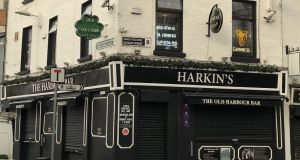 This was historically one of the more watery parts of Dublin, hence “Grand Canal Place”, “Basin Street”, and even the “Old Harbour Bar” (aka Harkin’s)

At the back of Guinness’s Brewery these days is a building site that helps explain some of the locality’s now otherwise mysterious place names. This was historically one of the more watery parts of Dublin, hence “Grand Canal Place”, “Basin Street”, and even the “Old Harbour Bar” (aka Harkin’s).

These names were left high and dry when, first, the City Basin and then the original terminus of the Grand Canal were filled in.

Now Harkin’s Bar looks onto a disused stone warehouse whose curved front suggests the prow of a giant barge. The last actual barge left from the harbour behind it – once a complex of wet and dry docks, including a side-dock dedicated to the brewery – in 1960.

You can currently catch a glimpse of the harbour foundations through a fence on Pim Street, opposite the Guinness visitor centre. The hoarding also features a mural on a tangentially related subject, the life of Brendan Behan. This may be ironic. Behan could have done with a period in dry dock. But the mural commemorates the fact that, as a Harbour Bar regular, he “had his last drink [there] in 1964 before suffering a heart attack”.

The area’s hydraulic origins are commemorated too in an old nickname, “the back of the pipes”. This dates from Dublin’s original reservoir (spelt “City Bason” on old maps), which was built circa 1670, and supplied the then much smaller city with water from the river Poddle.

A later, bigger version included landscaping with lime and elm trees and walkways that made it “the pleasantest, most elegant and sequestered place of relaxation the citizens can boast of”, according to one visitor. The basin was approached then through an ornamental arch, and well-off Dubliners went there to promenade in their finery, and sometimes listening to bands or watching firework displays.

It’s hard to imagine this on the modern Basin Street, where the flat complexes enjoy neither trees nor water, not to mention bandstands (although as recently as October, and for about two months before Halloween, there was no shortage of fireworks).

On a 1756 map of Dublin, there were still green fields between the “bason” and the city. Guinness’s was about to start filling them from 1759, followed by the canal. Digging of the latter began in 1765 but a decade later, a cynical traveller named Richard Twiss was already poking fun at the prospects of it ever reaching the Shannon.

At current rates of progress, he wrote in 1775, “it bids fair for being completed in three or four centuries”. In fact it took a mere quarter of a century after that, by which time the city “circle line”, which would eventually supplant the one into James’s Street, had been added.

Meanwhile, and for well over a century, brewery and canal enjoyed a symbiotic relationship. Contrary to the traditional joke about Guinness being made from Liffey water, it used to be the brewery’s boast that it was made from the superior canal variety, suitably filtered.

The city basin was also linked to the canal in later decades. But it had outlived its usefulness by 1869, after which Dublin was supplied from the Vartry reservoir in Wicklow instead. The original canal terminus soldiered on until the 1950s, and then lingered alongside Guinness’s for another 20 years, by which time it had become a public health risk. Rats were a problem. So was the water itself.

Interviewing residents of Basin Lane for this newspaper in 1974, Elgy Gillespie noted an iron footbridge – “the Cage” – that had been enclosed after a man was blown off and drowned in a section of the canal called “the Gut”. She added: “No one knows exactly how many children have been drowned in the Harbour: I heard of a woman who lost two”. The stretch was filled in soon afterwards.

Among the benefits of the Vartry scheme, apparently, was that Dublin’s water became softer than before. Earlier supplies caused more trouble for the pipes, whatever about the natives. But true to form, the Behans may have preferred the hard stuff.  Before the family’s move to “Siberia” (Crumlin), they had lived in the north inner city, where there was another, later basin. That one is still there, although today it’s just a charming park, a smaller version of what the Dublin 8 one must have been in its glory.

In Confessions of an Irish Rebel, Brendan Behan mentions an old grand-aunt who lived next to it. “She was born and reared at Blessington St, near the Basin, formerly the city reservoir, and whose waters, she claimed, were cleaner and purer and better for making tea than the ‘new stuff’ from Roundwood.”