No ‘value for money’ in giving away public assets for nothing 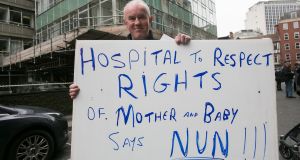 Dave Hiernan from Blackrock during a demonstration at Government plans to hand ownership of the new National Maternity Hospital to the Sisters of Charity. Photograph: Gareth Chaney/ Collins

The Minister for Health Simon Harris insists that his “golden share in the new €300 million State-funded national maternity hospital means the public interest will be protected and the facility will operate independently.”

But why give away any public assets for nothing, to anyone, to any company, to to any charity or to any religious order? Why is a so-called “golden share” needed when we, the people, will own the asset? If the Minster for Health thinks the Sisters of Charity can run this hospital well, why not simply lease it to them at a peppercorn rent?

Has a value for money study under the Department of Finance’s own framework been undertaken on the project and on the allocation of ownership to the St Vincent’s Healthcare Group (SVHG)? Why was a competitive tender to run this important National Maternity Hospital not carried out?

Is this the modern way of getting the best bids for major work undertaken for the State? Is it that the nuns did a good job for 100 years and because of this, they are still the best outfit to run this major operation for the State? Are “grandfather rights” the way a modern state should allocate such vast sums of money? Especially when our health service is not giving value for money under existing systems?

The issue is much bigger than the new National Maternity Hospital. The ownership of many, perhaps most schools and most hospital buildings and their equipment in Ireland, funded and maintained by the State, was given free to religious orders, without competitive bids. The religious may have supplied the grounds.

Successive governments simply gave schools and hospital buildings away to the religious orders in the past because Ireland was a Catholic state and they appeared to do the job. But that was then. All public assets which were given away to the religious for nothing, amounting to tens of billions, should be taken back into public ownership and be finally added to the balance sheet of the State as public, not private, assets.

These assets can then be rented back at peppercorn rents to those orders who are efficient and caring – which is probably most of them. The fact that the religious orders delivered education and healthcare on behalf of a predominantly Catholic Irish state in the past does not mean that this system of “free privatisation” of public assets should continue.

It is free privatisation because no payment was made in return for the assets. In normal privatisations, there are buyers who pay money for public assets and there is a bidding process. However, the return on many of these assets is not financial but social. It does accrue to the State and to beneficiaries and so peppercorn rents are reasonable but not on assets where there can be and are financial returns.

There is growing opposition in political parties to this free privatisation of billions in public assets in schools and hospitals to various religious orders. The opposition has been driven by the short-sighted insensitivity of some of these orders which have reneged on the agreement to redress those they abused in past decades. This point alone – not the free privatisation of public assets – has forced somnolent politicians into finally being critical of the fact that this religious congregation is to be the owner of the new hospital at Elm Park.

Most Opposition politicians are now critical – even if only because of the attitude of the orders on the redress scheme. They were to pay half of the €1.5 billion redress cost. Ironically, some offered to pay more “in cash and properties” – probably funded by taxpayers originally.

It is possible that most politicians have not thought of the free privatisation of public assets, when it comes to confronting those who wielded such immense power and influence in the past.

The Government published a guide on establishing value for money 10 years ago for public servants. It is a technical, 110-page document. It states that “The Government’s Value for Money and Policy Review Initiative is part of a framework introduced to secure improved value for money from public expenditure. The objectives are to analyse Exchequer spending in a systematic manner and to provide a basis on which more informed decisions can be made on priorities.”

This work may have been used in evaluating whether the new maternity hospital was needed, but why was it not applied to the issue of ownership and thus control and on the bidding process to run the hospital?

The decision by the Government to give the €300 million physical asset of the National Maternity Hospital to the SVHG is being made for all the wrong reasons. There has been no “value for money review” of whether it should be given to this organisation, nor has there been a competitive bid for such a major public investment. The ownership of the asset will be with the SVHG, with the State only having a dubious “ golden share”.

Governments need to take a wider public interest viewpoint and terminate all free privatisations of hospitals and State-funded schools, seek the ownership of all such free privatisations in the past and ensure these are listed on the State’s balance sheet as assets.