What’s needed is the sort of thing Irish politics is hopeless at: a long-term plan 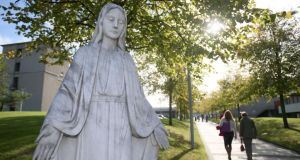 Sisters of Charity: the Minister for Health says the order will have no influence on medical care when the National Maternity Hospital moves to its St Vincent’s campus. Photograph: Niall Carson/PA Wire

“How do I get to Killarney?” the American tourist asked. “If I were you I wouldn’t start from here at all,” came the reply. An awful lot of policy debates in Irish politics trundle around similar territory. The controversy of the week has been whether the State should give the Sisters of Charity ownership of the National Maternity Hospital when it moves from Holles Street to a new €300 million building on the campus of St Vincent’s University Hospital.

Minister for Health Simon Harris has been lambasted for agreeing to the arrangement. He promises that the nuns will have no influence on the medical care. The current master pleads for the new hospital to be built, whoever owns it. Conditions at Holles Street are becoming intolerable for patients, she says. A forthcoming inquest into the death of one of those patients is likely to underscore the urgency, I’m told.

The concerns that the nuns were going to be sitting in the corner of the delivery room, directing the obstetricians – “Watch it there, doctor! Have you said the rosary?” – were slightly hyperventilated but not entirely misplaced. As my colleague Una Mullally fairly asked in an online column, why do the nuns want to own a maternity hospital anyway?

The answer, I think, is more about money and the protection of assets than about medical practice. The religious orders are not stupid. They can see as well as the rest of us that pretty soon barely any nuns will be left, just as the massed ranks of priests and brothers who taught generations of boys in Ireland’s schools are now a thing of the past. Many regret the passing of the orders; others remember only the crimes that some of them seemed to specialise in. Either way, they are going, going.

As this great depopulation of religious in Ireland’s hospitals and schools has gathered pace in the past two decades, the attitude of the Catholic Church, in its various incarnations, has been that what it has it holds. So religious orders have been transferring their assets – schools, healthcare facilities, land – to trusts that have been designed to maintain the ethos of the orders after the nuns and reverend fathers have gone to their eternal reward, wherever that may be.

Many of the orders no longer exist in a true, corporeal sense. They have few active members. They are ghosts. (And only some of them are Holy Ghosts.) But that hasn’t stopped them behaving like dogs in the manger when it comes to the ownership of properties that have in many cases been funded, maintained, enlarged and improved by State funds for decades.

The orders have trousered vast sums from property disposals, especially in Dublin in recent years

The orders have trousered vast sums from property disposals, especially in Dublin in recent years. Drive out of the city from St Stephen’s Green towards the N11, through the most expensive real estate in Ireland, and you’ll pass close to swathes of land that they have sold for development since the 1990s.

Meanwhile the State has ploughed billions of euro into the development of healthcare and educational institutions still legally owned by the church or the orders – including, quite recently, hundreds of millions of euro into the redevelopment of St Vincent’s University Hospital. Ditto Mater Misericordiae University Hospital and dozens of others. Who do you think pays the staff? Who do you think pays for the equipment? That’s right: you do.

But the orders retain ownership and have rebuffed any and all attempts to persuade them to relinquish the title deeds. The State’s primary interest is in service delivery; the orders are interested in ownership. That looks a lot like hardball to me.

Fair enough. The religious own the land; that status is protected by law. For all the juvenile bombast about appropriating religious assets, I suspect most people don’t want to live a country where the State can seize citizens’ assets when it sees fit.

The facts of history mean that a great deal of Ireland’s healthcare and educational infrastructure were created and therefore owned by the church. Even if we wouldn’t necessarily like to start from here, we can hardly start from anywhere else. The problem is that the short-term nature of so much of Ireland’s politics means that it’s not much good at undoing the facts of history.

That’s because political attention inevitably moves on from the controversy of the day or the week without lasting changes having been put in place. Special-interest groups often beat off attempts to undo their privileges because ministers and governments are focused on lots of things, whereas special interests are focussed on one thing, and because governments come and go while the special interests that are so prevalent a feature of our public life are permanent. And if you think that the nuns are the most powerful special interest in Irish healthcare, then you haven’t met many consultants.

What is needed is a plan from the State to match the careful strategy that the successors of the orders have used to protect their assets. The State has all the financial clout. And, as the orders know only too well, money talks. Once it has a plan it needs to get stuck in, to make the sort of compromises, trade-offs and deals with the orders that are the essence of politics.

What’s needed, in other words, is the sort of thing that Irish politics tends to be hopeless at: a long-term plan and a strategy to implement it. That’s not as much fun as all the roaring and shouting, but it tends to get you to your destination rather more quickly.

1 Co Donegal hotel offers €2 rooms to locals to circumvent Covid-19 outdoor dining rules
2 Blackrock and Mulhuddart: How Covid-19 affected two Dublin suburbs
3 Mary McAleese: ‘I’m a bit of an ’oul interrupter. That’s what I hope to be’
4 People who fail to self-isolate should be fined for their ‘selfish behaviour’, says GP
5 Covid-19: Contact tracers to start looking into where people are infected
Real news has value SUBSCRIBE