Newton Emerson: Identity cards are coming for us all 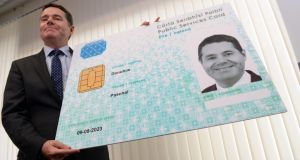 The UK government’s position paper on Brexit and the Border points to an identity card system, and recalls the intriguing fact that Britain and Ireland considered parallel systems only a decade ago.

The paper, published this week, offers to maintain the Common Travel Area and the rights of British and Irish citizens to live and work in each other’s countries.

“The movement of people should not alter at all,” it promises.

For the British and Irish, perhaps. Non-EU citizens from the rest of the world could also be dealt with, in theory, through an unchanged visa and immigration regime.

What this is building towards is an electronic 'everywhere' Border

But how would non-Irish citizens from the rest of the EU be allowed into Ireland then stopped from wandering into the UK at will?

The current system of spot checks on cross-Border traffic would be overwhelmed, not least because it depends on racial profiling.

Comprehensive checking of passports at the Border is as impractical as it is unthinkable. An immigration frontier along the Irish Sea would be straightforward by comparison but for the moment London has ruled that out.

Some other approach must be found – presumably based on the proposal the British government published in June to deal with the three million non-Irish EU citizens already in the UK.

They will be invited to apply for “settled status”, earning themselves an entry on a home office database and an “EU nationals residence document”. This can be shown to employers, landlords, banks, doctors and anyone else who might need to check someone’s entitlement to live, work and access public services in the UK.

Irish citizens have been specifically spared in this proposal. Like British citizens, they are not presumed to have to prove their nationality. But how would that work in practice, short of racial profiling on an industrial scale?

Conventions of law, bureaucracy and common decency suggest that if anyone is going to be asked for their papers, everyone must be – and that can already be observed.

Even before the EU referendum, the UK Home Office was delegating immigration checks to employers and landlords, while a debate had begun on asking for proof of citizenship in hospitals.

Where such checks have been introduced, a white face and a British or Irish accent has, of course, not been formal grounds for exemption.

What this is building towards is an electronic “everywhere” Border – based not so much on keeping certain people out as on making life difficult if they get in. It concedes that conventional frontiers are already overwhelmed and aims to turn every interaction with the state into a de facto immigration inspection.

A total of 16 million British people do not have a passport and the remainder do not want to carry theirs around at all times. As inspection requirements grow, demand for a national identity card will increase – and the unique position of the Irish will have to be accommodated.

We have been here before. Labour entered government in 1997 with a manifesto pledge against identity cards but changed its mind after 9/11, initially on security grounds, then later to combat benefit fraud and illegal immigration.

The first cards were issued in 2008, linked to a biometric database. Registration was compulsory for some non-EU foreign residents from the outset and was to be forced on everyone else in due course. The Tories scrapped the scheme immediately upon returning to office in 2010 – delightfully, the decision was announced by then home secretary Theresa May, following a prominent campaign against the “database state” by Tory MP David Davis, now her Brexit secretary.

Yet even to get this far, the scheme had to make significant compromises for Ireland.

The union flag was omitted from cards to avoid offending nationalists in Northern Ireland.

Irish citizens, including those born and resident in Northern Ireland, could opt for an “identification only” design that did not mention nationality.

Most significantly, the Irish government decided it also wanted to move towards internal immigration checks while maintaining the Common Travel Area, and accepted that would mean introducing its own identity card and UK-compatible database. The clear expectation was that British and Irish cards would have equal validity in the UK and the Republic.

The present Irish Government, having refused to help design an electronic Border for goods, may seem even less inclined to design an electronic Border for people. However, these are very different issues. Brussels seems content to let the Common Travel Area endure provided that is still what Ireland wants. If it is, Brexit simply underscores the case for co-ordinated identity card schemes.

The UK might note Ireland is ahead on this front. The Republic’s biometric Public Services Card is increasingly required for dealings with the State. Often described as a national identity card in the making, it is an electronic internal order already.