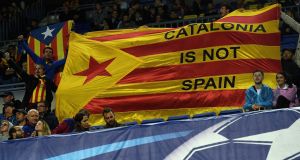 Catalan protesters: Sinn Féin is pointing to Spain and unwittingly reminding everyone of how passive the UK is towards its constituent parts. Photograph: David Ramos/Getty Images

The Dáil debated the Catalan crisis on Tuesday at Sinn Féin’s request.

How long before the republican party realises this topic is a double-edged sword?

The worse the crisis in Spain becomes, the more it undermines separatist positions inside the UK – and that applies to Scottish nationalists as much as to Irish republicans.

Yet both are clinging ever more tightly to Catalonia, as the reasons for their empathy boil down to confused romanticism.

A month ago, before Madrid sent in the police, Sinn Féin was exposed to mere jibes and rarefied questions about supporting the partition of Spain, or about how it defines a nation and its people.

Today, the comparisons are more pointed.

Most obviously, the UK appears a model of accommodation. It has held two Scottish independence referendums in 35 years and agreed by law and treaty to repeated Northern Ireland Border polls.

Two such votes went ahead without any official obstruction or even adverse comment, let alone a violent crackdown. The campaign then fizzled out, perhaps because provoking a reaction was the point.

In the Scottish referendum the following year, the UK almost broke up in what felt like a fit of absent-mindedness. Irish republicans escaped questions about how this could happen without any sign of British “dirty tricks”, especially over a region the UK would most definitely want to keep.

But now Sinn Féin is pointing to Spain and unwittingly reminding everyone of how passive the UK is towards its constituent parts.

Beyond UK politics, the Catalan crisis has compromised the EU for Sinn Féin and Scottish National Party purposes.

Scottish nationalists have been left in no doubt that unilateral action towards independence will cause horror in European capitals, even after Brexit.

Sinn Féin has had a more complicated let-down. It has presented Brexit as unacceptable in part because the EU is a protector of rights and citizenship.

On this basis, Sinn Féin has then claimed leaving the EU represents such a constitutional change that it merits a Border poll outside the agreed terms for calling one.

This elaborate chain of reasoning is weakened at every link by the EU’s total abandonment of the Catalans.

It would be an exaggeration to say Sinn Féin’s argument is destroyed – it has found a huge and willing audience in the northern electorate. However, it is becoming unwise for the party to claim ownership of the Catalan issue, and to keep drawing attention to it as if drawing a parallel. All most people can see now are differences, for which they are increasingly thankful.

If Irish republicans took a step back from the trite nationalism and victimhood that has automatically aligned them with the Catalans, they might see a bigger picture where the English are more friend than foe

The connection between Sinn Féin’s Brexit position and its walkout from Stormont is recognised across the political spectrum, although perceived differently – unionists see it as a conspiracy, nationalists more as justified opportunism.

The Stormont crisis, like the Catalan crisis, is coming to a head amid warnings of direct rule. This is an unfortunate coincidence for Sinn Féin, in both timing and language. No expression comparable to “direct rule” is used in Spain – people refer either generally to “intervention” or specifically to the constitution.

It is the British and Irish media that has picked up the English-language phrase and applied it to Catalonia, creating a sudden equivalence to Northern Ireland.

That only brings the differences into focus. London, unlike Madrid, is clearly extremely reluctant to call a formal halt to devolution. In Belfast, unlike in Barcelona, the main nationalist party has caused the suspension of regional government and is also issuing the darkest warnings about direct rule.

It was already difficult to keep all these arguments going – Sinn Féin’s proclaimed alternative to direct rule and devolution is “joint stewardship” by the British and Irish governments. Last week, Dublin called this “a distraction” and accused Sinn Féin of cynically “preparing for direct rule”.

Confusion risks turning to farce if republicans keep railing against direct rule in Northern Ireland and Catalonia, when the details in each are reversed and everyone knows it.

The real parallel with Catalonia is Italy’s Northern League. As pointed out by Janan Ganesh in this paper on Tuesday, both represent a new separatist phenomenon in Europe, where wealthy metropolitan regions resent the economic burden and democratic influence of the backward provinces attached to them by their respective nation states.

In a UK context, the southeast of England is Catalonia and Northern Ireland is the most backward and expensive province of all.

If Irish republicans took a step back from the trite nationalism and victimhood that has automatically aligned them with the Catalans, they might see a bigger picture where the English are more friend than foe.

The DUP-Conservative deal presents a perfect opportunity to highlight this. But Sinn Féin has brought down Stormont and continues abstaining from Westminster – the two arenas necessary to put unionism’s Spanish practices on the spot.

3 ‘Doug and Kamala together are almost vomit-inducingly cute and couply’: The VP’s stepkids speak