Moria camp tragedy is a direct result of inhumane policies 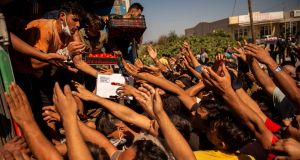 Moria refugee camp, the largest in Europe, is no more. Lesbos island awoke on Wednesday to flames and smoke engulfing the camp which has so often been described as “hell” by many of the thousands of people who have been trapped there.

Let us hope that a similar camp is never recreated and that European countries show solidarity in helping to relocate those who have been uprooted again, this time on to the streets of Lesbos.

A small Greek island just a few kilometres from the Turkish mainland, Lesbos has since 2015 been one of five “hotspot” islands where the EU has been outsourcing its responsibilities towards refugees and asylum seekers fleeing war and persecution.

Since the announcement of the EU-Turkey deal in 2016, which essentially trapped refugees in transit on Greek islands, many voices (Greek, European, asylum seekers, politicians, medics, lawyers, humanitarians) have been united in calling for an end to this migration policy which has caused untold harm to tens of thousands of people. The conditions in the camps on these islands are inhumane and not equipped to address even the basic human needs and rights of those living there.

When I arrived in Moria in May 2019 to work as a doctor with Médecins Sans Frontières/Doctors Without Borders (MSF), the camp had 5,000 people in a space for 3,100. From July 2019, with successive changes in policies and attitudes at a national and European level it became apparent that conditions for asylum seekers and refugees would deteriorate.

Access to the Greek public healthcare system was revoked for new asylum seekers. “Decongestion” of Moria stopped and the government announced its intention to build closed camps on the island where freedom of movement would be restricted. A new asylum law was introduced which has been described as “designed to deport”, rather than safeguarding vulnerable people’s right to a fair asylum procedure.

By March 2020, when the pandemic hit Greece, there were more than 20,000 people living in Moria camp without any meaningful additional resources. Tensions in the camp and on the island were painfully high.

Since then, the camp has essentially been in a police-enforced lockdown with restricted movement in and out. There was no public health justification for these measures. For months, when there were no cases or sporadic cases on the island, and Greece had opened its borders to tourists from all over Europe, thousands of people were contained in Moria, with reduced access to essential supports including medical and psychological care. The most vulnerable were left afraid, alone and confused.

There has always been inadequate access to shelter, water and sanitation facilities, healthcare, legal assistance and protection in Moria. In 2018, MSF teams observed that nearly a quarter of the children participating in mental health programmes had attempted to take their own lives, self-harmed, or had thought about taking their own lives.

Beyond the occasional headlines was the daily human suffering: children living afraid, alone and unprotected, developing severe mental health conditions; people unable to access specialist and lifesaving medical care; pregnant women afraid for themselves and their unborn children; torture survivors imprisoned wrongly for reasons they did not understand.

Once an asylum seeker arrived in Moria their fight for survival began – from finding shelter and navigating the often violent “food lines”, to finding water and accessing basic healthcare. Negotiating the labyrinthine asylum procedure was nearly impossible without a lawyer, of which there were far too few.

A lack of information on arrival, a lack of access to legal aid and a lack of understanding the asylum system was the norm. It added to the fear and frustration felt by people interned in the camp.

A case of Covid-19 in Moria was always a matter of when not if. Authorities had six months to prepare. In that time, while some vulnerable people were moved, the inhumane conditions in camp did not change. Medical organisations advocated for a response that relied on best evidence, carried out in collaboration with the asylum seekers, respecting their dignity and humanity.

However, the Greek government’s response to the first case involved an enforced quarantine on the camp for 14 days – with no movements in or out – essentially locking people into a situation where the virus could spread rapidly.

The government even used the first case in the camp to push for closed camp settings – completely unjustified from a medical perspective but furthering an agenda to limit the rights and freedoms of asylum seekers.

This brings us to the fire that engulfed almost all of Moria camp on Tuesday night, leaving more than 12,000 people homeless and destitute, including about 4,000 children. This was not the first fire in Moria, which were common, along with so much preventable suffering and death.

To me, the cause of the fire is clear: it is a direct result of inhumane and callous migration policies both at a Greek and European level. This is a humanitarian crisis caused not by war or natural disaster but by political decisions. Asylum seekers on Lesbos now need quick and decisive support including evacuation off this island (where tensions remain extremely high) to safety.

EU states now have a responsibility to show solidarity in ensuring that those affected by the fire are provided with a safe place to stay. At home, Ireland recently resettled a small number of unaccompanied minors from Greece. This humanitarian act should now be urgently extended to more of those affected by this latest upheaval.

During my time working here, I have met and treated many people who lived in Moria camp. The vast majority were fleeing war and persecution – I was in awe of their bravery, resilience, kindness, and industriousness. On Tuesday night they had to take what they could carry and flee again. They deserve so much better.