Open space doesn't equate to beautiful urban landscape: Awful mistakes have been made, such as Smithfield and Newmarket 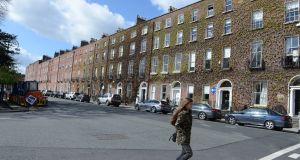 Areas of Georgian Dublin such as Fitzwilliam Square were not simply random patchworks of individual plot developments, but carefully controlled streetscapes and building types decided on by the great developers, including the Wide Street Commissioners, the Gardiner Estate and the Pembroke Estate. Photograph: Cyril Byrne

One of the least debated and perhaps most important issues confronting Ireland in the 21st century is that of planning our built environment. For the last century and a half, our urban areas and in particular our built-up city areas have been allowed to develop in a haphazard, often ugly and unplanned way.

When you consider the parts of Dublin city for instance, which are most pleasing to the modern eye, most of them came about not from a process of architectural accidents, but from a very clear vision of how those areas should be developed and how they should look as a whole following their development.

9 Five habits learned during the pandemic that we should keep

11 Is paying someone to clean your house the last word in middle-class privilege?

13 This warm, spicy stew can be rustled up in 15 minutes

16 Q&A: Covid-19 new variants in Ireland - everything you need to know

17 ‘A very nice baby with beautiful fair skin ... It was like they were selling a doll’

18 Maureen Gaffney: The land of the mother and baby homes

19 Should I end my strained relationship amid the Covid-19 pandemic?

22 Luke O’Neill: Scientists have delivered against Covid-19. Now the politicians need to

27 Make a holiday in Ireland an unforgettable experience

28 Brexit red tape: ‘If nothing changes, Ireland will be closed’

32 Ireland should be wary as tech giants cancel Trump

34 Ireland’s vaccine rollout: Can we stay at the top of the EU league table?

36 Pete Lunn: We need to tackle Covid-19 differently after this lockdown. Here is how

37 There is no such thing as unhealthy food