Merger with Fianna Fáil is a no-brainer for SDLP

Remoteness from positions of power is the antithesis of party politics 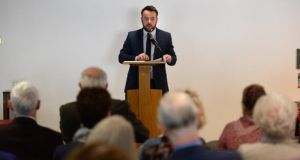 SDLP leader Colum Eastwood: “The next phase of politics will be centred on the Ireland we now choose to build.” Photograph: Dara Mac Dónaill

There were two things that Derry, the home and the heart of John Hume, never thought would happen. The first was Brexit. The second was that Sinn Féin would win the Foyle Westminster seat. Foyle was Hume’s and his protégé Durkan’s seat. Both have now happened and together they explain why the SDLP is deep in discussion with Fianna Fáil about a possible partnership.

Reading the signs of the times is healthy for individuals and essential for organisations. The post-peace status and future of the SDLP is not a new discussion. It was being debated in Derry 40 years ago. Would it, should it, could it transpose itself after its primary mission of peace was achieved? That debate about how broad a political church it was and whether it could morph into a conventional political party was often discussed but never fully resolved.

When, in recent times, the seminal achievement of the SDLP, the Belfast Agreement, went through a more negative phase resulting in the suspension of the institutions, politics degenerated into an arm wrestle between unionism and republicanism. Voters bemoaned the loss of a more sophisticated and generous politics but in the arm wrestle it was more important to make sure that the other side didn’t win and for a good few years now it was Sinn Féin’s arm that was on the table.

Then Brexit came. The slow, often frustrating pace of politics in the North that had thankfully replaced the violence was swept into the whirlwind of Brexit. The constitutional position was thrown into the centre of politics, in Ireland, in Europe and, most importantly, in Britain. The party that had argued most cogently for being a part of Europe, that had a small but articulate voice in Westminster and had been among the main architects of Anglo-Irish policies, was now without presence or influence at any of these seats of power. To be distanced or adrift from the positions of power is the antithesis of party politics. To be in that position when a substantial portion of your manifesto is at the cutting edge of change is a humiliation.

The new, young leadership of the SDLP had a choice: allow the party to continue a slow and painful decline into irrelevance or resurrect an old idea of positioning itself in the mainstream of all-Ireland politics. That argument had merit in the past but in the slipstream of Brexit it was a no-brainer. For the foreseeable future all politics will be obsessed and dominated by the economic and constitutional consequences of Brexit. The Irish border is already a central cog in the debate about when and how Brexit will manifest itself on the ground. The issue of a border poll, how and when it should be triggered, will keep imposing itself. The changing demographics in Northern Ireland, nationalism and unionism moving out of minority and majority status to face each other on an equal numerical basis, will create its own dynamics and opportunities.

There are suggestions that the SDLP, being the smaller entity, organisationally weak and financially poor, has little to offer to Fianna Fáil. This ignores the reality that the Border and the relationship between the North and the Republic are going to dominate politics on this island for the foreseeable future. Those issues are bread and butter to the SDLP. There is a residue of memory, insight and experience within that party that can be acquired only at the coalface. The big beasts of Hume and Mallon are no longer there but the new young Turks have been reared at the same coalface and are already portraying their own charisma and insights.

Northerners are often described as the more direct of the Irish, calling a spade a spade rather than an agricultural instrument but there are subtleties and paradoxes in Northern life that sometimes elude their brethren in the Republic.

At this year’s party conference the present leader, Colum Eastwood, said: “The Ireland that Hume imagined has come to pass, an Ireland at peace with itself and free to decide its own destiny. The next phase of politics will be centred on the Ireland we now choose to build, having been gifted that powerful inheritance. It will be driven by an understanding that a fractured Ireland is always an Ireland in waiting. In terms of realignment, the future this party collectively decides will be driven by that primary purpose.”

That short extract succinctly captures what is in this realignment for Fianna Fáil. When you see yourself as the movement with primary responsibility for the unification of the lands and the peoples of Ireland, a proper and official presence in the North will bring great joy and comfort to the cumainn throughout the length and breath of Ireland. There will be a quiet pride in the Fianna Fáil heartlands. It also puts the party on a par with Sinn Féin, whose all-Ireland credentials have been an irritant and modest embarrassment to the elder republican party. In crucial and sensitive discussions about future relationships on this island, as a party in government or even in a confidence-and-supply relationship with Fine Gael, Fianna Fáil will have the advantage of being a co-guarantor which has an actual presence and membership in the North.

Even 40 years ago it was known that such a realignment would result in tensions and disappointment among a portion of the SDLP. The numbers and the depth of the disappointment has been dissipated by a series of electoral results. The greater number know that the post-Brexit map has not been drawn yet but that this coming together of the SDLP and Fianna Fáil is an important element in the configuration of this map.