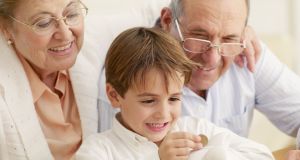 Grandparents are a vital cog without which many families could not function or would really struggle.

It is hard to believe that anyone could take seriously the proposal from Shane Ross and his pals in the Independent Alliance that a €1,000 grant should be introduced for grandparents looking after their grandchildren. But such is the Dáil arithmetic that Government reaction came via a bit of behind-the-hand whispering that this might not be the cleverest idea, along with promises to cost the whole thing.

The Department of Finance and Paschal Donohoe have better ways to spend their time than doing the sums on this one. This would be a new payment which would be impossible to administer and control, potentially hugely expensive and completely inefficient. This idea needs to be given a quick and decisive burial.

Shane Ross argues that grandparents deserve “recognition”. And so they do. The role of grandparents has always been central and now, with young parents under pressure to both work, and many one-parent families, they increasingly step in as minders. They are a vital cog without which many families could not function, or would really struggle. Some mind children every working day, others a few days a week. Many are on call when a child is sick, or school is closed for the dreaded teacher-training day, or whatever.

But to suggest that this means the State should pay them a grand a year if they mind their grandchildren for more than 10 hours a week – and sure maybe we should throw in the same for uncles or aunts or third cousins – is high-level bonkers.

Remember that the suggestion is a “self-administered” scheme, so goodness knows how many will apply on the basis that they meet the minimum proposed 10-hours-of-minding rule, or how anyone would even begin to check on this. A vague estimate has been produced that this might cost €70 million or so, on the basis of 70,000 grandparents qualifying. I suspect it would be an awful lot more, even if we forget about the scope for fraud.

And how would you check? Perhaps we will employ a fleet of inspectors – granny wardens to comb the nation and make surprise house calls. Maybe the TV licence inspectors could double up. Or, like the Brits planing for Brexit, do we come up with a “seamless” electronic solution? Maybe we electronically tag grandparents and monitor them, or send out drones to take pictures in the kitchen window to see if grandad is in place delivering up the lunch.

I’m sure a few socially conscious parents would ensure that their Mammy and Daddy clock in and clock out and do their requisite 10 hours. But you could see – putting it delicately – that many might not be quite as rigorous.

Anyway, apart altogether from the impossibility of administering this and the near-certainty it would turn into a de facto automatic grant for anyone whose grandchildren lived within 50 miles, there are other problems here.

If we want to help families, is this the best way to do it? Here we need to consider what is often forgotten in debate here – spending money in one area means not spending it somewhere else, or raising taxes. There really is no such thing as a free lunch.

And there are many, many better ways to help families. For example, senior Government officials, in a paper published during the week, suggested one way to help less well-off families was to pay more to those who receive an additional State payment now for having a “qualifying child” or children. This directs cash to less well-off people with children, a group where – research shows – child poverty is a problem.

Then there is the question of how to help parents who go to work, many of them short of cash due to mortgage or rent payments and high childcare bills.

There is a debate about how best the State does this. Given the evidence of the benefits of proper care and education – in the widest sense – for pre-school children, the extension of supports in this area in recent years seems appropriate. Beyond this, many argue for directing more resources to developing childcare provision and some favour providing tax credits to offset the cost to parents. Either – or a bit of both – would be a lot better way to spend money than the Ross scheme.

The Independent Alliance idea would simply involve way too much badly spent money. This is the problem with so-called universal schemes, where you try to address a specific problem by providing money to a large group. Here, even the problem isn’t clear, beyond a suggestion that the expenses incurred by the grandparents are a problem for some.

Universal payments, once introduced, never die. Various attempts to means test or tax child benefit have been fought off, even when the argument is made that doing so would allow much higher payments to the less-well-off. Introducing another broad payment, given equally to the grandparents getting the bus over to mind their grandchildren and those driving over in a Merc, would be crazy.

If we want to help older people, then there are plenty of better ways to support them and more urgent needs to meet. If we want to help families, then direct cash to them as efficiently as possible, or develop the childcare services they depend on. But dressing up help for grandparents in the cloak of helping families is just a guarantee of wasting a load of money.

Leo and Paschal should call the Ross bluff. With serious work to be done, the Government can’t let itself be held hostage on this one.