Saints and Spinners: Frank McNally on a magical mystery tour of eastern France 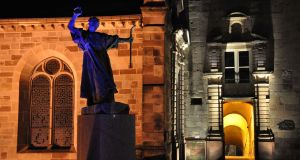 Statue of St Columba (aka Columbanus) in Luxeuil. Photograph: iStock

There are at least two statues of St Columba (aka Columbanus) in Luxeuil, and in both he looks a bit mad. This may not have been unintended. Born in the kingdom of Meath circa AD 540, he was considered eccentric during his own lifetime, especially on mainland Europe, even as he hobnobbed with kings and built a string of monasteries.

The familiarity, bordering on rudeness, with which he addressed ecclesiastical superiors, including popes, was notorious. As Thomas Cahill writes in How the Irish Saved Civilisation, it has prompted historians to wonder if Columbanus “was a little off his rocker”.

But unbalanced or not, he was a high achiever. His monuments aside – and the Abbey of Luxeuil was the greatest – he is also now considered an inspiration for what many centuries later became the European Union. When one of the EU’s actual founders, Robert Schuman, addressed a 1,400th anniversary conference at Luxeuil in 1950, he invoked Columba as the project’s patron saint.

Alas, Columbanus’s work fell foul of a seventh-century Eurosceptic, Queen Brunhilda, who expelled him and and his followers.They were being deported from Nantes when, in a lucky break, the ship sank. Columbanus survived, headed back inland, across the Alps, and ended his days in Bobbio, Italy, establishing yet another monastery there: one of maybe 60 he set up in his 25-year odyssey.

I might know even more about this fascinating man now, except that, due to an unfortunate scheduling clash, our guided tour of Luxeuil that day was happening at the same time as a football match in Croke Park involving my native Monaghan and Kildare.

I had been following this furtively by text until the wretched phone crashed. Then a good Samaritan – a recovering Mayo GAA supporter named James Golden – lent me his phone, which was live-streaming the game. So I was somewhat distracted from the rest of the talk on Columbanus, although I did invoke his help once or twice, and suspect he was implicated in a crucial late score by his near namesake, St Conormcmanus.

I was now, as the French say, en fête. But the scheduling conflicts continued. Even as we finished the Luxeuil tour, locals were gathering in bars to watch the World Cup final. I would happily have joined them except that some of us now had an imminent dinner date with the mayor of another local town, Plombières-les-Bains.

The mayor’s name was Albert Henry, and I wondered briefly if he was any relation to Thierry, in which case I might have a plausible excuse to withdraw from dinner in protest at France’s failure to have his cousin handed over to an international crimes tribunal. Happily, however, the first thing Monsieur Henry asked us, through his equally affable deputy and translator Sophie, was if he were interested in the football.

“Mais oui!” we said. So moments later, the mayor was driving us along extraordinarily narrow back streets – at one point he had to reach out and close a window shutter to let us pass – towards a cinema where most of the town was watching the game. Only after that, with celebrations exploding, was dinner considered.

As the name implies, Plombières-les-Bains is a spa, and was a major attraction in its heyday, now passed. Like so many French towns, it’s still beautiful, but a bit empty, especially of youth, who must leave to find work.

But there was a time when the rich and famous came to take its waters, and at least one occasion when those waters changed the world.

French and German spas have form in this regard. You’ll recall it was at Bad Ems, the other side of the Rhine, that Kaiser Wilhelm received a visit from the French ambassador in 1870, and expressed mild annoyance about it in a telegram to Bismarck, who spun an edited version to newspapers, precipitating the Franco-Prussian War.

Well, a decade earlier, it was in Plombières that Emperor Napoleon III concluded a secret and far-reaching agreement with the Sardinian Count Cavour. There was no leaked telegram on that occasion. But as both men intended, there was a war: the one that brought Italian independence.

And it seems that when the mayor drove us through Plombières, we were following in their footsteps. Or their wheel-tracks to be more exact, because the venue for their talks on July 21st, 1858, was a moving one.

According to one historian, the emperor and count drew up their pact in a horse-drawn carriage “as it undertook a slow passage round and round the little town”.

4 Covid-19: UK getting vaccine first because it is a ‘much better country’