They struck up the Marseillaise. “What do the words mean?” he asked 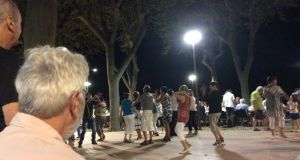 Martyn Turner looks on as children dance with grannies cheek by jowl with folk who wouldn’t shame ‘Strictly’. 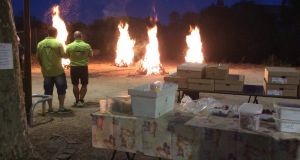 Three large fires, made from old vines, are lit and the cooking begins.

We were in France on July 14th – which we always call “Bastille Day’ and which the French always call, bizarrely, Le Quatorze Juillet.

France takes its revolution quite seriously. The French make a point of invoking hard-won rights whenever and however they can. Witness the forthcoming battle between Emmanuel Macron and the unions over reforming the employment code. There is always a place in every village for Liberté, Égalité and Fraternité to be etched into stone somewhere. And, of course, the putative Turner Retirement home for the Bewildered Cartoonist isn’t situated in a village. It is part of a commune, thank you very much.

Each commune decides the date of its fireworks and ours, traditionally, go up in smoke on July 13th. Of course this year most of the fireworks were held on the 13th around the country as the government decreed, in remembrance of the massacre in Nice last year, that no rockets would make pretty patterns in the sky on the 14th.

As the sun set, the parade of the kids reached its destination, back where they started from just underneath the château, next to the church, in front of the mairie (town hall). The setting sun segued seamlessly into the start of the fireworks which were set off from one of the bridges across our river, the Thongue, which mightily flows for at least five days a year. The rest of the time it is a muddy ditch, albeit 10 metres wide.

I’m always a bit nervous of fireworks in summer. But nothing caught fire that shouldn’t have caught fire.The next day was the main event. This village holds a brasucade every Friday during the summer. They have an extra one for July 14th. Brasucade is an Occitan word meaning cooking stuff on an open fire. It was, originally, chestnuts but these days it is moules, which are mussels, I think. I don’t know. Don’t eat fish.

The brasucade is brilliant. A ticket costs €13.50. The whole village, well, a working majority of the village, eat together under the plane trees on the promenade which is next to the river and is paved in part for such occasions. The rest of the space is given over to petanque (the rural version of boules) alleys and a children’s playground and a war memorial.

Three large fires, made from old vines, are lit and the cooking begins. Chief chef is the retired village doctor which is a fine bit of assurance for the patrons. A guarantee that you won’t get ill. We are all allocated a place to sit, you bring your own cutlery and crockery and a glass for the wine, which, of course, flows copiously.

While this is going on music is playing and the dance floor is filled. Kids dance with grannies cheek by jowl with folk who wouldn’t shame Strictly. There are lots of line dances which everyone seems to know and, at the end of the evening, there is the dance where everyone sort of goes under the arches formed by the other dancers which seems to be endless perpetual motion. Then there is the sitting down dance. Sit, legs out straight and akimbo so the person in front can snuggle back to you. At the head of the line someone directs the whole line to sway this way and that in time with the music. I have never seen the like.

We were with a group made up of English, French, Irish (if that is what we are after 50 years of living in Ireland) and Australians.

One of the Australians loved the brasucade. So friendly, so welcoming, a wonderful display of human interaction and joy in this miserable world, he said. Then they struck up the Marseillaise. “What do the words mean?” he said. He’d asked me that the night before at the fireworks so I’d looked it up in the meantime.

After I had quoted “may impure blood water our fields”, and “all of these animals who, without pity, tear their mother’s breast to pieces” and gone on to declaim the full seven verses of blood, revenge, tyranny, chivalry, triumph and glory and more blood he said, “Ugh. Wouldn’t wanted to have known that before I ate my dinner.”

1 Prepare for six to nine months of Covid-19 restraints, warn health officials
2 Sean Quinn stunned at rebranding of Quinn Industrial Holdings
3 Róisín Ingle: How to eat out in a pandemic. Don’t do what I did
4 Speed and distance of Covid-19 droplets tracked by Mater researchers
5 Probate is changing: What does that mean for you?
Real news has value SUBSCRIBE