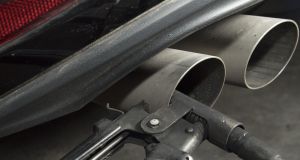 “Nitrous oxide emissions kill about 75,000 people a year in the European Union . . . But car companies are big employers, people like their cars and so the dirty business continues.” Photograph: Thomas Kienzle/AFP/Getty Images)

A pesticide scare across continental Europe this week has left German egg-lovers bereft. The federal agriculture minister forced supermarkets to empty their shelves and manufacturers to take back potentially poisonous product.

But if the egg industry was a subsidiary of the German car industry, things would have been very different. The public poisoning would have drifted on for at least two years after it was exposed, with critics of potentially lethal eggs attacked for hating hens.

When it comes to German cars, looming elections have seen politicians’ fear of voters finally outstrip their fear of industry and ask if they wouldn’t mind agreeing to a voluntary recall with a view to stop poisoning everyone.

If Germany’s crooked car makers crash during the transition to the e-mobility era, last week’s “diesel summit” in Berlin may be the moment they left the road.

To get a handle on the ongoing Dieselgate disaster, German politicians pressured car executives to fix cars that breach emissions limits on the road but not when car software detects it is being tested in a laboratory.

Nitrous oxide emissions kill about 75,000 people a year in the European Union, according to European Commission estimates. That’s three times the number killed annually on European roads. But car companies are big employers, people like their cars and so the dirty business continues.

But Germany’s courts are not as beholden to the industry as its politicians. Stuttgart administrative court, mulling a ban on older diesels, recently heard expert testimony that software updates are just window-dressing. They are far less expensive than hardware fixes and far less effective at bringing emissions below legal limits.

Unless the car industry agrees to retrofit millions of older diesel exhausts, so the Stuttgart court was told, the only way to get the city’s air to within legal limits is to ban the dirty diesels.

With German carmakers slowly choking on their own fumes, the dieselgate scandal took a new turn in recent days with news that Lower Saxony’s state premier Stephan Weil allowed VW vet a key parliamentary speech in 2015 about the company’s emissions manipulation.

This caused outrage because Lower Saxony is a major shareholder in VW, and Weil sits on the supervisory board. Weil said this was standard practice, intended only to avoid any legal difficulties in the ongoing criminal cases against VW in the United States.

When German print journalists conduct an interview with a politician, they agree the text will only appear in an 'authorised' form

With a snap election looming in the state, the Social Democratic Party leader accused his political opponents of dirty tricks. He released the draft manuscript, with VW suggestions flagged. Comparing this with the final speech made clear that, while some minor changes from VW were made, more drastic rewrite requests were rejected. Hitting back in recent days, Weil’s office released older speeches showing how previous administrations – manned by his political opponents – did the same.

Even in August, this was hardly news. But the German media, now hypersensitive to any sign of political-auto collusion, went mad. Leading the fray was Munich’s Süddeutsche Zeitung daily, which described the Weil-VW revelations as “embarrassing and somewhat doltish”.

How could the Lower Saxon government be expected to oversee VW, it asked, when it allows the car company lead it with one hand and, with the other, hand it edited speeches. The whole business, chief leader writer Heribert Prantl thundered, “spoke volumes about the relations in general between politicians and the auto industry”.

Such concerns would be well placed if they weren’t utterly hypocritical, coming from journalists whose relationship with politicians is no less incestuous.

When German print journalists conduct an interview with a politician, they agree the text will only appear in an “authorised” form. This means the politician – or PR handlers – have the final say over the text. Anything interesting, honest or politically risky can be struck from the record after the fact.

Because the interviews are usually published in question and answer form, journalists have no room to smuggle in deleted material elsewhere. The end effect is that such interviews are a dreary business, shadows of their former selves.

German media organisations say their hands are tied by “personal rights” which, in Germany, insist that people are the legal owners of their own likeness/image and words. The result: media organisations are careful not to misquote people or photograph them without consent.

Every few years a row erupts with a politician over excessive editing of interviews. Editors argue that well-intentioned personal rights have been exploited by public figures as a right to rewrite their own words.

But their courage never goes far enough to run both interviews – original and authorised – to show their readers what goes on.

The DJV journalism union concedes authorisation of interviews is a “deplorable custom” of German print media, but says the status quo will not change until a media outlet fights back and risks a day in court.

But until they put their readers before influential interviewees, they are in no position to give lectures on censorship.

1 Covid-19: NPHET member denies trying to ‘scare people’ with warnings
2 This charming man: how Paschal Donohoe won the Eurogroup presidency
3 Monster or machine? Everything we know about coronavirus after six months
4 ‘My rent here is so low it’s a joke’
5 The more London’s lockdown eases, the clearer the crisis becomes
Real news has value SUBSCRIBE