‘The weekend is a tribute to Terry Willers and the festival he created. He would have loved it’ 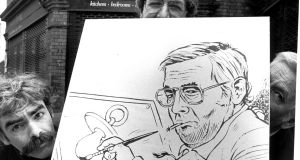 Someone kindly emailed me recently to let me know that it was 25 years ago that we started the Rathdrum International Cartoon Festival.

Technically , of course, it was started around 27 years ago but like any hefty offspring gestation took a while. In those days Terry Willers, best known, I guess, as the cartoonist on Halls Pictorial Weekly, and I formed a mutual support group. We would talk almost daily on the phone like two old fishwives, without the fish, or the wife bit.

One day I was telling Terry about some foreign cartoon festival or other that I had been to. “It was fun,” I said, “meeting other cartoonists and sharing the misery and looking at cartoons and buying books, drinking, eating, and, and . . .”

“We could indeed.” I replied and we discussed that if we did it, where it would be held.

Terry was a wonderful cartoonist and, more than that, he sort of lived his life in cartoon style.

How can I explain? I once persuaded him to come and play golf. I picked him up in Rathdrum and took him down the road to Woodenbridge. When we were leaving Rathdrum his wife, Valerie, waved us goodbye and started laughing. “Why are you laughing?” I asked. “You’ll see,” she replied.

I dropped him back a few hours later. “What happened?” she asked. “He got hit by a golf ball,” I said. “Yup. that’s about right,” she said, “take him fishing and he’ll come home with a hook in his nose. Take him to golf and he’ll get hit by a golf ball.” Just like one of his cartoons.

So the thought of 10 days in France in his company opened up all sorts of possibilities. A ringside seat at Terryworld. We took the boat to Cherbourg and headed south. He started making jokes about French cuisine; all frogs’ legs and snails. I kept telling him, lecturing him, that this just wasn’t true. In all my years of going to France up until then (and subsequently too) I never saw a snail on a menu, anywhere, ever, doesn’t happen. It’s one of those myths, like all the French wear black berets (some actually do) and hooped shirts and wax their moustaches.

We stopped for lunch somewhere in the middle of nowhere. He asked me to translate the menu. “Escargots,” said Terry, “What are those?”

Actually the trip was uneventfulish. He loved the festival and they loved him. He didn’t speak a word of French but, of course, with a bit of paper and a pencil he was able to keep everyone entertained for hours.

We started planning the festival. I would invite the cartoonists and organise the exhibition. Terry would do everything else. He had a committee to ease the labour. I had Her Indoors who is very good at organising things. On occasion when we needed something – this was usually once a day – Terry would announce that he knew someone, he would give him a ring. And that is how it went. Tedious, hard work (my wife tells me).

You could never make one phone call without having three back-up calls. You could never write one letter (this was in the days before email . . . how on earth did we ever do anything before email?) without having a few consequent letters to write. After three years I had had enough of Rathdrum and Rathdrum had had enough of me so I retired to my field in Kildare and watched from the sidelines. It carried on for three more years.

The good folk of Rathdrum are reviving the festival this year. On Friday, July 28th they will open an exhibition of Terry’s work. And on the Saturday and Sunday following there will be cartoon workshops and other activities. You can get the details from their Facebook page – Rathdrum International Cartoon Festival.

The weekend is a tribute to Terry, who died a few years back, and the festival he created. He would have loved it. I miss him.

1 Blackrock and Mulhuddart: How Covid-19 affected two Dublin suburbs
2 Mary McAleese: ‘I’m a bit of an ’oul interrupter. That’s what I hope to be’
3 Covid-19: Fears grow over increased restrictions for cities and local areas
4 Kevin Babington: Learning to live again after life changed forever on Long Island
5 Traffic chaos as ‘singing and dancing’ woman stops car in middle of motorway
Real news has value SUBSCRIBE