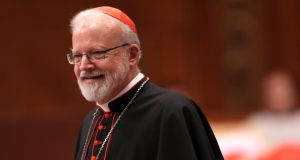 ‘They are uplifted by some signs of hope among US bishops – for instance the Archbishop of Boston Cardinal Seán O’Malley (above), in a recent television interview, stating that the Vatican investigation of the US women religious was a “disaster”.’ Photograph: Franco Origlia/Getty Images

I have recently returned from an 18-city speaking tour in the US, organised by the network of Church Reform movements. They impressed me. Their commitment to the faith is strong, but they believe that the church as institution is not working, and that it needs urgent reform.

They display great energy and enthusiasm, and in my experience they are warm, loving people looking for a deeper spirituality and sense of community in their church. Their knowledge of theology is impressive.

More than half the people attending one gathering at a Call to Action conference in Memphis last month had masters degrees in theology. They are not the people who have left the church, but they are on the fringes. It was sad to see such an enormous resource being left unused by the church authorities.

The bishops in the US are much more vocal than our bishops who, with one or two exceptions, are quiet men who mostly avoid the public glare. The US “culture warrior” bishops take a strong public stance on some moral issues, mainly contraception, abortion and same-sex marriage.

Their doctrinaire statements, often followed by the sacking or excommunication of people who, according to them, violate the rules, drive many away from the churches.

Those who do not give up entirely often respond by setting up their own small communities, where they come together to pray, read the scriptures, and celebrate the Eucharist, with a married priest, with one of the Roman Catholic women priests or with no priest at all.

The Pope Francis effect is significant among them. They are very hopeful as they see him returning to the teaching of the Second Vatican Council. They follow church affairs closely and showed significant interest in the Extraordinary Synod of Bishops in Rome.

They are able to debate knowledgeably where Francis is trying to lead the church. They are uplifted by some signs of hope among US bishops – for instance Archbishop of Boston Cardinal Seán O’Malley, in a recent television interview, stating that the Vatican investigation of the US women religious was a “disaster”, or the new Archbishop of Chicago, Blase Cupich, stating clearly at his consecration that he fully supported Pope Francis.

In the US church context, that was a political statement, nailing his colours to the mast, leaving people and bishops in no doubt where he stood.

Many people I spoke to believe the church as institution is in the process of collapse, and is beyond recovery. That may be true. All institutions are under pressure today, and it is impossible to know what shape things will take. But fragmentation is a danger in the US church.

The agenda from Rome appears to be less concerned with sexual morality and is emphasising social justice and care for the poor and those on the margins. Some of the more vocal bishops are uncomfortable with this.

Their statement on preparation for the further Synod of Bishops next October, that they would await instruction from Rome on how to proceed, was a clear indication of what Reese was referring to. It contrasted with the clarity of Cardinal Vincent Nichols of Westminster. He asked all the parishes to take the time to discuss the documents of the synod last October during the next six months.

While in Memphis I visited the Civil Rights Museum, and listened again to the speeches of Martin Luther King. What the US church needs is someone with a dream, and with the strength of character to lead the people out of the miasma they are in, and bring them to the promised land – the Reign of God that Jesus talked about.

Fr Tony Flannery is a Redemptorist priest and founder member of the Association of Catholic Priests who was silenced by the Vatican in 2012. Since then he has been active in the Catholic Church reform movement. His website is tonyflannery.com

1 Sweden’s grim Covid-19 result: More death and nearly equal economic damage
2 Mother and five children sleeping in car while seeking accommodation
3 Donald Trump is an amateur populist – the real trouble is yet to come
4 Six counties had no Covid-19 case over past week
5 Amy Schumer, in tears: ‘I know how I am. No one else can deal with it’
Real news has value SUBSCRIBE