Magna Carta at 800 – the Dublin connection 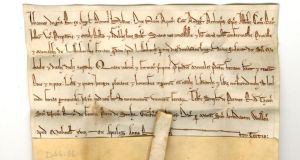 ‘The Magna Carta 800 anniversary falls after a decade and a half during which Western governments have introduced legislation to restrict civil liberties, so threatening the fundamental principles that Magna Carta is supposed to have enshrined.’ Above, a rare copy of Magna Carta which had gone unnoticed for generations but has now been unearthed by researchers. Photograph: St John’s College/University of Cambridge/PA

Eight hundred years ago this week, in a meadow by the river Thames near Windsor Castle, one of the most famous documents in world history was born: Magna Carta (The Great Charter). Magna Carta is credited with being the first effective check in writing on arbitrary, oppressive and unjust rule – in a word, on tyranny.

It established the principle that executive power should not be above the law.

To mark this anniversary, Christ Church Cathedral, Dublin, is placing its own copy of Magna Carta, which is contained within the cathedral’s Liber Niger (Black Book), at the centre of a new, interactive exhibition in the cathedral crypt.

Magna Carta was a ‘charter’, that is a legal document issued by King John of England (1199–1216) granting liberties to the freemen of his kingdom. Unlike most charters, Magna Carta was not granted by the king of his own will. The liberties in Magna Carta were extracted from King John by his barons, who were rebelling against his unjust rule.

The principles established by Magna Carta still reverberate today. King John promised not to levy taxes without consent (from which sprang the idea of parliament and the famous maxim “no taxation without representation”).

The king also undertook not to imprison, dispossess or outlaw his men except by the lawful judgment of peers – the principles that we now consider the cornerstone of due process of law and trial by jury. These principles informed the American Bill of Rights (1791) and the Universal Declaration of Human Rights (1948).

The 800th anniversary of Magna Carta falls after a decade and a half during which western governments have introduced legislation to restrict civil liberties, so threatening the fundamental principles that Magna Carta is supposed to have enshrined.

In 2012 US attorney general Eric Holder defended the targeted killing of US citizens in drone strikes by reasoning that “due process” and “judicial process” were not one and the same. The US constitution guarantees the first, he said, but not the second.

Magna Carta’s fame has spread across the globe, but the first country outside England to receive Magna Carta was Ireland, which had recently fallen under English dominion.

Not everyone in Ireland benefited from Magna Carta. The legal protections conferred by the charter were primarily for the English settlers and were not normally extended to the Irish population.

Magna Carta has particular links to Christ Church and Dublin, because the then archbishop of Dublin, Henry of London, was one of King John’s most trusted officials and his name appears in the original text of Magna Carta as the second named witness.

The Christ Church copy of Magna Carta appears in the 14th century manuscript knownas Liber Niger. The section of the Liber Niger containing Magna Carta served as a lawyer’s handbook. It contained copies of many documents of legal and constitutional significance.

Having arrived in Christ Church the book became part of the monastic library at the cathedral. The manuscript shows marks in the margin indicating clauses of Magna Carta that interested the monks.

The Magna Carta exhibition is a permanent part of the cathedral’s Treasures of Christ Church exhibition. For further information see christchurchcathedral.ie A one-day symposium exploring Dublin’s role in the making of Magna Carta takes place at the Wood Quay Venue on Thursday, July 2nd. For further information contact: heritage@dublincity.ie or register at bit.ly/MagnaCartaDub

1 Drug dealer loses codes for €53.6m bitcoin accounts
2 ‘IRA has gone away’: McDonald responds to Garda Commissioner’s comments
3 Ben Affleck: ‘It took me a long time to admit I am an alcoholic’
4 Anti-Irish bigotry in Britain has not gone away
5 A Dad with brain cancer: I was given 18 months to live, it put things into perspective
Real news has value SUBSCRIBE