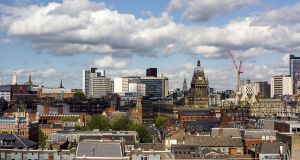 Many Irish people have made their home in Leeds in the last half-century. Photograph: Getty Images

Leeds United’s whirlwind start to the Premier League season has brought the city into the consciousness of many Irish people in a way that it perhaps hasn’t been since the heyday of Ian Harte and Gary Kelly. Just in time then for the 50th anniversary of the Leeds Irish Centre, a hub for migrants to the Yorkshire city over the decades.

Anna Walsh, a PhD student at the Institute of Irish Studies at the University of Liverpool, has spent much of the last five years at the centre speaking to Irish people who have made their home in Leeds in the last half-century.

In her thesis, she says for a lot of manual labourers making the trip across the water, the road “literally ended in Leeds”, with many settling in the city after the completion of the M1 motorway from London in 1968.

Many people from Mayo, including Walsh’s father, settled in the city, leading to some labelling Leeds a “Mayo town”.

Walsh quotes a Dubliner from Brendan McGowan’s book Taking The Boat: The Irish in Leeds, 1931-81, who said: “I kinda got the impression that if you weren’t from Mayo or the west of Ireland anyway you weren’t quite as welcome in the Irish Centre. Nothing was ever said directly like that, but you did get a few kind of sneers, or, you know, kind of implied that you weren’t so welcome.”

One of Walsh’s interviewees draws even more precise distinctions, blaming violence at one dance hall on “the Connemara men . . . They’d be battling in there very fast.”

However, Walsh who lived in Leeds for 15 years, feels other people’s perception of Mayo exceptionalism at the centre became a “self-fulfilling prophecy”.

Leeds was the venue for the Fleadh Cheoil na Breataine in 1972, reflecting the strength of the Irish population and its branch of Comhaltas Ceoltóirí Éireann at the time.

Yet a liking for traditional music seemed to be something to hide for many migrants.

One of Walsh’s interviewees played for the local branch which won the All-Ireland title in 1973 and 1974 but described it as an “underground identity”.

He went to a Catholic school where “the whole register would have had a list of predominantly Irish names, but nobody actually admitted to being Irish”.

He says this was largely because of the Troubles which meant “it was not a good climate to be Irish”. “None of my friends at school knew that I played Irish traditional music, it was a horrible thing to have to keep.”

The Troubles lurks in the background of a lot of Walsh’s interviews. One woman, who arrived in Leeds at the time of the Yorkshire Ripper said she had “come out of the fire, in Belfast, straight into a city that was on high alert”.

When out shopping she found it “a bit upsetting that nobody came to check my bags. I thought, you know, that anybody could plant a bomb around here. And nobody would stop ’em!”

Walsh argues these events fed into “a fear of expressing any facets of identity that could be considered uncouth elements of Irishness” by their English hosts and a real desire to be seen as respectable and hard working.

She writes that these forces played a major role in moulding the Irish experience in Leeds.

Walsh attended the 2017 edition, led by former Leeds midfielder Noel Whelan (whose father is Irish), and found it to be an event where “Paddywhackery abounds, leprechauns are everywhere” and a band with Leeds accents played Galway Girl.

Many of her interviewees owned or expressed an interest in bits of Irish kitsch, which while plainly inauthentic, still remained an “easily digestible” symbol of home. Literally digestible symbols of home, such as Barry’s Tea (or Lyons), are also prominent.

Leeds Irish Health and Homes makes it “an institutional policy that any visitor to the headquarters, or to any of the institution’s groups, is first of all offered a cup of tea”.

The Irish community in Leeds is an ageing one. There were 8,000 living in Leeds, according to the 2011 census, and were overrepresented in every age band over 49. As a result, Walsh says that while “if you were to go to the Irish Centre to see the All-Ireland final to inevitably see Mayo lose . . . it would always be absolutely rammed”, such institutions are on the decline.

The Harp, the city’s last traditional Irish pub, closed in 2016, while Walsh says the organisers of the Irish Centre recognise that “when people die they don’t get replaced”. Younger, more educated migrants don’t see the same need for such places and don’t rely on them for work to the same extent.

One institution that bucks the trend is Hugh O’Neill’s GAA club, which began its assault on the Yorkshire championship at the weekend. It won the senior championship in 2015 for the first time since its foundation in 1948.

In this most unpredictable year, when Leeds United ended its spell in the wilderness, maybe Mayo can take some inspiration from O’Neill’s and end their drought too.

1 Cork shootings: Gardaí find lengthy apparent suicide note on one of the dead men
2 Former solicitors ran an ‘identity factory’ in committing fraud – court told
3 Ciara Kelly: I was pregnant, unmarried, a junior doctor and I got old-school comments
4 Róisín Ingle: Five small ways to find joy in a pandemic. Only one of them is illegal
5 Kanturk farm shootings: A timeline
Real news has value SUBSCRIBE