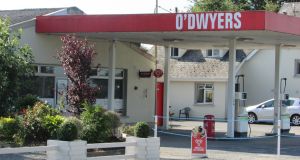 The closure of O’Dwyers shop in Boherlahan, Co Tipperary, after 70 years of familly ownership will render the parish a less attractive place to live or work.

Last month an era for a Co Tipperary parish ended. Eddie and Helen O’Dwyer retired as proprietors of the local shop, and the family name disappeared from the business life of the community after 70 years of unbroken service.

O’Dwyer’s of Boherlahan was legendary in mid-Tipperary. Selling almost everything from a needle to an anchor, the family provided long opening hours and a wide range of services: cashing cheques, supplying sandwiches to the primary school, selling agricultural diesel and even providing short-term credit facilities. The closure will render the parish – which 50 years ago boasted five shops and a post office along with a thriving co-operative creamery and hardware store – a less attractive place to live or work.

It is a story that has become sadly common in rural Ireland. Some are even suggesting it is better to concentrate on developing new regional cities as wealth-creating engines instead of using resources to preserve rural living. Cities can become powerhouses of growth as Dublin has, but this is not always true, as the catastrophic economic collapse in the urbanised north of England during the Thatcherite years demonstrates.

Developing large towns as growth poles makes sense for Ireland, when we consider the disproportionate size and housing problems of Dublin city, but we don’t have to put all our economic eggs in one basket. The preservation of rural living with balanced regional development is a more attractive option, not only from an economic and housing standpoint, but also from a cultural, environmental and heritage aspect.

The preliminary census figures for 2016 appear to show little has changed here with only the north-western counties of Mayo, Sligo and Donegal recording relatively minor declines in population. Clearly, large numbers of Irish people favour the idea of living and raising families in rural areas and they should be supported in this aspiration.

So, while everybody agrees rural Ireland faces many challenges, population decline isn’t the central one. Journeying nationwide to document this country’s best walks for The Irish Times, I have noticed it is economic activity, rather than people, that is shifting towards urban centres. Farms are becoming part-time as their owners travel to work in the nearest big town. This is not necessarily a negative, since the IDA cannot provide a factory for every parish and, at least, spending returns this way to non-urban communities. Generally, rural dwellers have come to accept this arrangement as satisfactory since it allows them continue living in their communities.

However, areas where I keep bumping into tourists are a notable exception. Here, it is still possible to do what urban dwellers take for granted: buy a newspaper, fill with diesel or find a pub serving food. The disproportionate value of tourism for maintaining rural services reinforces my belief that visitor spend is an underexploited resource, which can be key to rural regeneration.

An example is the Tipperary village of Upperchurch. Despite a disadvantaged hinterland, the village maintains two shops, a post office and three pubs, while in recent years more than 30 couples have raised their families in the community. Here the local Development Association concentrated on maintaining services, attracting tourists and building a favourable image. They established a creche, a climbing wall, a series of walking trails, a genealogy centre and a local information office along with sheltered housing for older people. Overseas visitors now come to Upperchurch, and more importantly, the local population base has stabilised.

But long-term prosperity for rural areas also requires a diverse economy based around indigenous resources. Locally branded food, activity holidays and niche market start-ups in rural areas should be incentivised even more. We must create economic conditions that allow others profitably provide services to rural communities, as the O’Dwyer family delivered to Boherlahan for more than 70 years.