At least 22,000 women and girls die each year from unsafe abortions 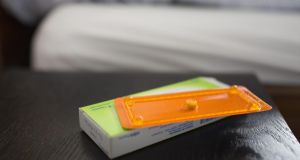 “Termination of pregnancy is a safe, effective procedure that can be accomplished by minor surgery or tablets.” Photograph: Ute Grabowsky/Getty Images

Setting foot in the busy maternity hospital in West Africa in September 2011 , I was completely unprepared for what I found: women arriving on death’s door, with complications such as heavy bleeding and septic shock.

In the operating theatre, examining many of these women, I found trauma marks on the cervix, caused by objects such as sticks that had been inserted to terminate their pregnancies. Examples of unsafe abortion that had resulted in horrific injury.

I realised then the sheer desperation that must have driven these women to do this, and how limited their options must have been. They were willing to resort to any means to terminate their pregnancy, even while knowing the huge risk to their own life.

Some of these women needed antibiotics or a tetanus injection for infection. Others required a blood transfusion for life-threatening bleeding, or major surgery to repair perforations to their bladder, bowel or abdomen, or to remove infected tissue caused by peritonitis or an abdominal abscess.

Even if these initial complications could be rectified, I knew these women faced the danger of long-term impacts, including chronic pain, anaemia and infertility. Even if a woman simply didn’t want this one pregnancy, she may never be able to have children again.

When these women left the hospital, the health effects didn’t stop there. Unsafe abortion – and unwanted pregnancy – can bring shame and stigma with wide consequences such as being ostracised from the community, or finding it harder to get married or complete schooling. This meant the women could face secondary mental health consequences as well.

Encountering this sort of medical emergency was shocking. But I shouldn’t have been surprised; I now know that unsafe abortion represents a major public health issue worldwide. At least 22,000 women and girls die from unsafe abortion each year, making it one of the top five direct causes of maternal mortality. On top of this number, an estimated seven million women and girls suffer long-term consequences from unsafe abortion, including serious side effects and lifelong disability. Sadly, these numbers are likely much higher – many unsafe abortions, just like the pregnancies, are not disclosed, either by the women themselves, their families or those who provided the abortion.

In some hospitals it is the cause of up to 30 per cent of obstetric emergencies. Yet this devastating cost to the health and lives of women and girls is completely preventable.

Safe abortion care is recognised as a medical necessity, established as part of the package of sexual and reproductive health that is considered worldwide to be beneficial to preventing mortality in women.

Termination of pregnancy is a safe, effective procedure that can be accomplished by minor surgery or tablets. These tablets, a two-stage, five-pill therapy known as medication abortion, can be dispensed as part of outpatient care. Every safe abortion provided is an unsafe abortion averted.

Yet barriers to safe abortion care do not stop at shame and stigma in many societies and tend to be especially prominent in the settings where Médecins Sans Frontières (MSF) – the organisation I work for – operates. They include legal restrictions, economic and social obstacles and administrative hurdles; institutional decision-makers and medical providers may also lack knowledge, fear repercussions or object on personal grounds.

But even where abortion is restricted, women, for many reasons and despite the risks, will still want to terminate their pregnancy, and will resort to any means available to them to do it. Whatever the reason, if a woman is willing to resort to using a stick in an attempt to end her pregnancy, she must feel she has no other option.

Since 1990, the baseline for the millennium development goals, we have seen reductions in maternal mortality in many countries but deaths from unsafe abortion are where we’ve seen the least change. This is simply unacceptable.

We haven’t seen the progress we’ve wanted at MSF either. Although safe abortion care has been part of our policy since 2004, we saw minimal change in the extent of the provision of care from 2007 to 2016. But, in the last three years, with a renewed focus on the issue, we are starting to see real change.

I hold the hope that the next young obstetrician who goes on assignment will not be confronted with the tragedy of post-abortion complications like I was. We must continue to push for more progress on safe abortion care worldwide: women’s and girls’ lives depend on it.

Dr Claire Fotheringham is medical adviser for obstetrics and gynaecology