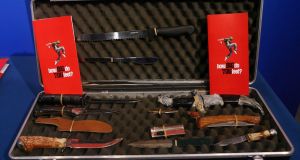 A selection of knives confiscated by An Garda Síochána and put on display in Dublin. Photograph: Niall Carson/PA

In the first half of 2020, knife seizures increased by 13 per cent, amounting to 1,214 seizures in total. There have been some awful incidents of tragic knife crimes recently where people have lost their lives.

Knife crime is a horrific thing, which kills. But what’s not going to “solve” it, is a reheated proposal by Fianna Fáil’s Jim O’Callaghan, seeking to double the maximum sentence for possession of a knife from five to 10 years.

14 Wood burning stoves: The inconvenient truth about the homely heater

17 Kate Winslet: ‘I shouldn’t have worked with Woody. I’ll always grapple with that regret’

19 Michael Walker: Why Marcelo Bielsa is manager of the season so far

20 LeBron James tells Zlatan Ibrahimovic: ‘I will never shut up’

23 ‘We can’t just dump our rubbish in the gorden. It’s the Vico Road – there’ll be meetings’

24 ‘We should have done better’: Cillian de Gascun, Paul Reid and Stephen Donnelly look back

25 Paul Flynn: Three satisfyingly simple dishes that anyone can cook

26 Covid-19: Self-isolation rules to be eased for healthcare workers

28 Social Democrats to explore options for growth in Northern Ireland