‘It would be much healthier, in every sense of the word, if doctors and other healthcare professionals could approach each challenging case on its own ethical merits’ 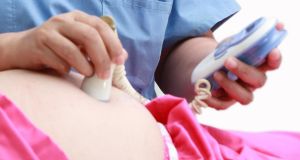 ‘We know from birth statistics that a baby born at 24 weeks has a 20 to 30 per cent chance of survival and a 40 per chance of being left with a severe disability.’ Photograph: Getty Images

Rare cases where a young woman in the relatively early stages of pregnancy is declared brain dead, such as the case that arose this week, raise a host of moral, ethical, biological and legal issues. In an Irish context must be added the constitutional factors brought about by the Eighth Amendment to the Constitution.

The woman in her 20s, on life support and at the centre of the current controversy, is about 16 weeks pregnant. She is reported to be brain dead – which means she would have lost function of her brain stem, the area at the base of the brain that drives breathing, circulation and other involuntary activities that keep the body alive. It means the woman is now being mechanically ventilated, with specific interventions to maintain cardiac and kidney function. She would be receiving full nutritional support and will be hydrated to keep her body within normal metabolic parameters.

Looking at the biological and medical issues in the first instance, key questions include how long can a foetus survive inside a mother who is brain dead, when is the correct time to deliver the baby by Caesarean section and what is the baby’s long-term outlook assuming it is delivered safely.

Because of their rarity, all doctors have to guide them are individual case reports. A 2010 systematic review of the management of brain-dead pregnant mothers carried out by doctors at the University of Heidelberg found just 30 cases worldwide in a 28-year period. In 12 of those cases a viable child was delivered after extensive life support for the mother.

Although they found no clear lower limit to the gestational stage which would restrict a doctor’s efforts to support both the mother and the foetus, the authors clearly state that the older the baby is when its mother is declared brain-dead, the greater its chance of survival. They found no information on how these children fared in the longer term.

In the patients identified by the German researchers, the longest a brain-dead mother received life support was 107 days; the average was a more modest 38 days.

Ethical and legal considerations are of course paramount in a case such as this. When faced with brain death in a pregnant woman, a physician’s initial focus must be on saving the life of the foetus. In the later stages of pregnancy, this will involve supporting the mother until a Caesarean section can be carried out.

However, in early pregnancy brain death, the issue is more complex. The right to life of the mother and foetus help guide doctors to make decisions on an individual basis. In general, if prolonging the mother’s life is likely to have a positive outcome for the foetus then such intervention would be considered ethical.

However, the gestational age of the baby is a key factor in making this decision; many doctors across Europe faced with a brain-dead pregnant woman whose foetus was 16 weeks gestation, would be reluctant, on ethical grounds, to recommend life support for the mother.

In Ireland, two legal realities trump other considerations. One is the 2013 Protection of Life during Pregnancy Act; the other is the 1983 amendment to the Constitution. In practice, doctors treating the woman in a case such as the one that has been reported this week could not use ethical principles alone to guide their decision-making. Not because they are invalid but because the Constitution renders them effectively irrelevant.

It is not possible for statutory legislation to cover rare events, such as the case that came to light this week. It would be much healthier, in every sense of the word, if doctors and other healthcare professionals could approach each challenging case on its own ethical merits. Dr Muiris Houston is The Irish Times health analyst

1 Tony Holohan stepping back from role as chief medical officer
2 Coronavirus: Rise in transmission in Ireland sparks concern
3 Several factors pushing Boris Johnson towards a Brexit deal with Brussels
4 Why are markets booming when a crash is on the way?
5 A ‘rock’ and a ‘patriot’: Tributes paid to Tony Holohan as he steps back
Real news has value SUBSCRIBE