Kathy Sheridan: There is nothing funny about Brexit 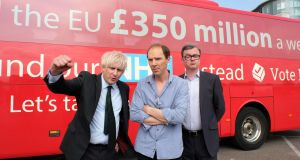 What have we learned from the Brexit fiasco ? That we should take nothing for granted. That a small, well-funded band of determined, self-serving, amoral shysters can bring down a great country. That we are right to be fearful. That we should aim to do better but appreciate and loudly protect what we have. Because we now know up close what happens when a country grows complacent.

In the feverish Monday evening atmosphere around Westminster, one of Channel 4’s usually measured news presenters practically roared at a Dutch MEP that the EU must do something about the backstop to save the May deal. It was a startling distillation of Brexit madness. The frowning MEP said the Belfast Agreement must be protected, that the EU had done enough for the UK, that it wasn’t the EU’s job to save the Tory party, that it was time for Westminster to stop the internal squabbling.

But how important was the backstop anyway? In a Sunday Times analysis of the 105 Tories opposed to the deal, only 13 cited the backstop as the main reason for their opposition. That’s worth bearing in mind.

“Do you understand from our perspective the need for a backstop?” RTÉ’s Caitriona Petty asked Boris Johnson on his visit to Dublin last Friday. “Well, no,” he said, clearly unconvinced that he should have given it some advance thought. And of course he skated over it with some classic Johnson hilarity: “We buy 78,000 tonnes of your cheese every year!” Cheese! How we laughed.

Tonnes of Irish people find this hilarious presumably, since according to a Sunday Independent report, Johnson had an “overwhelmingly positive” reception for his speech at the Pendulum conference. “He had the majority of the 3,000-strong crowd interested, engaged, laughing and even applauding to the beat of his words.”

Such a hit was he that while “quite a few people” left during the “high-brow” Q&A between him and Bryan Dobson, “not one backside budged when Johnson addressed the audience . . . Like it or not, when Boris speaks, people lap it up.”

No doubt they did. Echoes of Bertie Ahern’s pre-crash speech to a trade union conference come to mind and the laughter when he suggested the economic pessimists should kill themselves. This time, overwhelmingly, they were business people presumably facing into a very messy, unpredictable future, thanks to the securely wealthy Johnson and pals.

But the notion that any level of discussion about Brexit would be considered “high-brow” by a well-informed Irish audience is an interesting one. It may be tedious, even unenlightening (how could it be otherwise with an interviewee famously careless with truth or detail and the several important cabinet posts entrusted to him). But “high-brow”? What was an interviewer of Dobson’s calibre expected to do? Discuss a Ladybird version of Brexit for an Irish business audience who had paid upwards of €800 for admission?

Trump, Johnson, Brexit et al were treated by the media in earlier times as hilarious, diverting, box-office. Until pretty soon, it was no longer hilarious

This is how Trump, Johnson, Brexit et al were treated by the media in earlier times. Hilarious, diverting, box-office, until pretty soon, it was no longer hilarious.

Johnson’s character in the recent Channel 4 film, Brexit : The Uncivil War reflected his role as the self-serving, blond entertainer who knew precisely what was going on, nodding pretend-vague assent to his own side’s claims about Turkish immigrant invasions and the lying messages on the side of the bus.

Like his speeches, the film was just a tad too amusing, too wryly indulgent of a caricatured Johnson, Banks, Farage, Jenkin and company, too much in love with the magnetic Benedict Cumberbatch reprising his brilliant, maverick Sherlock role as the Vote Leave campaign director Dominic Cummings, a campaign strategist portrayed here as a scorned, visionary genius, single-handedly responsible for magicking the UK out of the EU.

Not a word about the DUP’s £435,000 of dark money nor indeed any mention of the North at all (probably a simple reflection of the truth, in fairness). Just a hint of the National Crime Agency investigation into the source of Aaron Banks’s £8 million political donation – the largest in British history – to Leave.EU. Hilarious.

Scenes bookending the film show Cummings giving a full account of himself at a public inquiry. Which would be satisfying had they actually occurred in real life.

No one has actually been held to account in that way. The writer James Graham defended the fictitious scenes saying: “An audience knows that. It’s a drama.”

“An audience knows that.” It’s a big assumption to make about the most chaotic, serpentine festival of lies, deceit and posh boy gambling over several generations. And Brexit hasn’t even happened yet.

This is the hard truth for politicians sweating in the sturm und drang of Westminster, Dublin and elsewhere. There are millions of people who think it’s over, or that it is beyond tedious, or that it represents fine entertainment as long as celebrities continue to drop in and party poopers don’t go all high-brow on them.

We should have a care.