Kathy Sheridan: The media got it right on Trump, but nobody cares

‘Even when winners are caught out in direct lies, there is no shame, and none is expected’

Univision anchor Jorge Ramos was thrown out of a Donald Trump event on Tuesday (August 25th) when he tried to ask the Republican presidential candidate a question after Trump called on another reporter. Video: Reuters 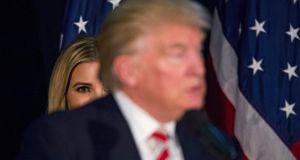 Ivanka and Donald Trump: The presence of the president-elect’s daughter, a businesswoman, at a meeting with the Japanese prime minister has yet to be explained. Photograph: Damon Winter/The New York Times

Any journalist who has shadowed a certain stripe of candidate will know the feeling. It’s that sense of exasperation when they spout slogans on the doorsteps and you wait and pray for the voter to ask a few calm, well-informed questions. And you wait . . . and wait.

Most voters listen with their gut and a highlighter pen. Slogans are easy to digest. No college fee increases or property charges. Universal health care. Abolish the Special Criminal Court. What’s not to like? Budget schmudget.

Build the wall. Register all Muslims. Lock her up. Clear, well-defined slogans for sure. Now flesh them out for us, ask the journalists. How will the wall work? Did she commit any crime ? Doesn’t the register sound a bit Germany, 1930s . . . ? Oh, don’t be so literal. Get out of your elitist bubble. Voters just want to shake things up.

The Trump-Brexit era throws up some practical conundrums for media. In olden days, a big part of a political journalist’s job was to hold politicians to account for election pledges. To this end, parties were expected to write down their promises. Many voters called them “junk mail”, but journalists called them manifestoes. The odd citizen even kept them safe, so when promises were quietly ditched, they could use the manifesto as proof and demand explanations.

Of course, in real life they chose to roar obscenities at him instead. Yet the idea was a good one. People should be able to trust campaign promises. But they distrust politicians so heartily that in the last British election, the poor old Labour party under Ed Miliband came up with the idea of setting its campaign pledges in stone. Literally. Promises were inscribed on a very large tombstone.

It didn’t work out too well. Voters, apparently, don’t like stunts.

And so, inevitably, what we are witnessing now is the bright new dawn of the nonliteral campaigner. This jolly type with the forceful personality and slogans of certainty will have covered the country twice while the opposition – droning on about budgets, caveats and the absence of an actual plan – is only halfway round.

Balloting over, the nonliteral pledges vanish until all that’s left is a big, toothy grin, like a Johnson-Farage version of the Cheshire cat.

In Britain, despite an appalling vista, journalists have all but given up the fight to hold pro-Brexit politicians to account for pre-referendum positions. That banner on the bus pledging an extra £350 million a week for the NHS? The numerous declarations that the Norway model was a post-Brexit runner, or that Britain could stay in the single market, no problem? They scramble to find verification from a half-forgotten video or old websites from which material was hurriedly deleted.

But the real question is, who cares? Move on, they won, respect the will of the people, they’re told. This is democracy. Even when the winners are caught out in direct lies, there is no shame. Worse, none is expected.

And so, in the new era, there is no downside for a nonliteral, Trump-style politician. Last week, Donald Trump’s team felt obliged to warn the Japanese prime minister’s delegation not to take “each word” that the president-elect says “literally”.

The presence of daughter Ivanka, who runs Trump’s private business affairs, at a meeting with the leader of the world’s third-largest economy, has not been explained. Other foreign business partners have pitched up in transition towers. The potential for conflicts of interest is enormous.

A Washington Post analysis shows that at least 111 Trump companies have done business in 18 countries and territories across South America, Asia and the Middle East. They include eight that appear tied to a potential hotel project in Saudi Arabia, the kingdom that Trump has said he “would want to protect”.

When a New York Times journalist asked the camp’s senior adviser if the president-elect was breaking any laws by continuing to conduct business, her response was that the journalist was being “negative”. If the journalist accepted that as an answer, said a tweeter, then he was part of the problem.

The problem for all such tweeters – and voters – is that Trump’s modus operandi was well-heralded. During one rally at least, he laughed off the idea of a “blind trust” for his businesses, affecting not to know what it meant. He has resisted all demands to file tax returns. Shameful issues such as the Trump University fraud case and numerous others were widely publicised. We knew all this.

Here is something to remember: Contrary to relentless denunciation by Trump and fans, parts of the media – particularly the Washington Post and the New York Times – did their job exceptionally well.

But the nonliteral campaigner never has to say he’s sorry. He has only to sit back and listen to his pet commentators and contrarians lecture the media “bubble” on missing the story.

There is more than one side to this story. The media had it. No one listened.