Kathy Sheridan: Society is rigged to reflect the perspective of men 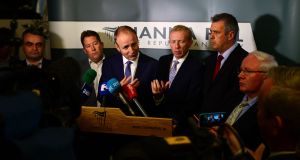 “Look at the current Fianna Fáil line-up. Not a single TD from the majority gender” Photograph: Dara Mac Donaill / The Irish Times

Fiach Mac Conghail’s flurry of tweets about the Abbey’s men-only main stage programme for 2016, was massively counterproductive. The national theatre director’s maddeningly glib tone merely fuelled the explosive #wakingthefeminists charge. His apology, when it came, however, was a good example of the genre. It had to be, of course. Still, he could have confined himself to a simple act of contrition and purpose of amendment. Instead, he wrote something quite brave and profound:

“The fact that I haven’t programmed a new play by a female playwright is not something I can defend. This experience has presented a professional challenge to me as a programmer and has made me question the filters and factors that influence my decision-making.”

Read that again. Every parent, teacher, garda, journalist, editor, lawyer, cleric; every politician, every paymaster, every policymaker in every field: read it again. Read it until you can reel it off by heart. Then reflect on this: those carefully considered words were written by a cultured, widely-read, likeable man, born in 1964. If such a man is forced to admit that unconscious bias may have seriously skewed his professional judgment, where does that leave the rest of society?

Brian Mohan, chairman of Fianna Fáil’s Dublin Central cumann, is probably quite a likeable, young man too. The 4.95 per cent of the vote he garnered in his run for Dublin City Council last year, obviously left him feeling entitled to a shot at the general election. So naturally he was disappointed when Mary Fitzpatrick – longtime survivor of the Drumcondra mafia’s works and pomps – got the party’s nod ahead of him. In response, he has launched a High Court challenge to the gender quota system, with Michael McDowell leading the legal charge.

It was bound to happen. The rage at some selection conventions has been barely contained, as the parties on occasion, chose to nominate women who hadn’t won the room. Lest anyone thinks the country has gone women-mad (in a publish-spirited sense), this is a product of the Electoral Amendment (Public Funding) Act, under which registered parties must ensure that 30 per cent of their candidates are female. Not a third. Just 30 per cent.

Just to be clear. Unlike the generals that Aung San Suu Kyi – a 70-year-old woman – is up against in Burma, these women are not guaranteed a great wodge of Dáil seats, just the nominations. Then they get to fight a full-blown election campaign, nobbled no doubt, by barely-contained hostility from the disentitled male party colleagues. Furthermore, no party is legally obliged to go along with this. It need only comply if it wants to pull in the same generous level of public funding. This is the same public funding to which every woman in the State contributes.

Look at the current Fianna Fáil line-up. Not a single TD from the majority gender. Yet there are some who believe that a little organisation is entitled to nearly €3 million a year of our money, without making a little effort to look a little bit like us? The pursuit of a court challenge suggests there isn’t even a smidgen of embarrassment about it at some levels, though not all.

Mohan responded: “Good point, who is the woman running for president? I didn’t get that memo.” Woods : “50 per cent of total candidates!” Mohan: “Oh right that’s great, the futures bright.”

There is a solution for the disaffected ones, proposed in yesterday’s letters by Joachim Fischer. There was never a better time to go Independent; read his letter for further instructions. Then read this line again: “This experience has presented a professional challenge to me . . . and has made me question the filters and factors that influence my decision-making”. *Lady Augusta Gregory, playwright.

1 Coronavirus: Further 17 deaths reported along with 73 new cases
2 Trump threatens to ‘close down’ social media companies after Twitter fact-check
3 Binoculars at the ready: Elon Musk rocket to be seen in Irish skies tonight
4 Ancient Roman mosaic floor discovered under vines in Italy
5 Michael McDowell: We will laugh at the puritanism of the two metre advice
Real news has value SUBSCRIBE